HEART Guitarist NANCY WILSON Talks ROADCASE ROYALE Bandmates And Music - "Together, We Kind Of Make The Rock And Soul Thing" 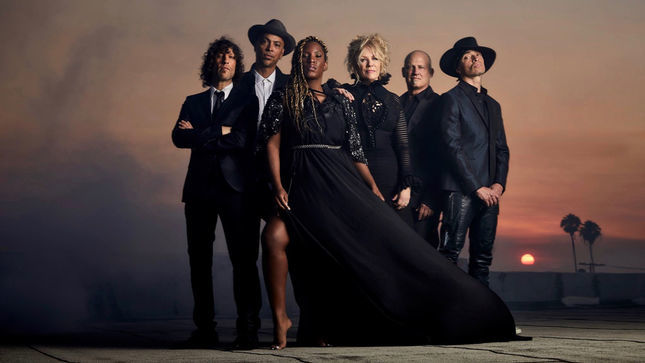 Jason Saulnier recently caught uöp with Heart guitarist Nancy Wilson to discuss her other band, Roadcase Royale. In the clip below she talks about the importance of a great logo, the album First Things First, the band as a family with Liv Warfield, Ben Smith, Dan Rothchild, Chris Joyner and Ryan Waters, and the secrets to remaining youthful.

Roadcase Royale released their debut album, First Things First, on September 22nd, 2017 via Loud & Proud Records. The album was produced by fellow Roadcase Royale band member Dan Rothchild (Heart) along with the band. The album track, “The Dragon”, is available for streaming below, courtesy of Billboard, who reveal that the song started life as Wilson's open letter to the late Alice In Chains frontman Layne Staley while he was in the throes of addiction. And in the wake of this year's suicides by Chris Cornell and Chester Bennington, the message behind the album's heaviest track is even stronger. Read more at Billboard.com.

“Roadcase Royale is a band I’ve always wanted to be in,” says Nancy Wilson. “We all write and create songs as a unit. It’s an inspired democracy. Liv and Ryan both bring a whole new level of magic to our new sound. I’m amazed after devoting my life to rock music how it now feels so brand new. That’s why our first album is called First Things First.”

The name of the band, Roadcase Royale came to the group during a backstage meeting they had last year.  Wilson said, “When I came up with the name Roadcase Royale it was an interesting symbol to me since the big heavy-duty road cases that our amps drums and guitars travel in are much like the musicians they accompany on the road. Strong and regal looking yet all scuffed up and dented, covered in funny stickers that tell the story of a crazy traveling circus.”