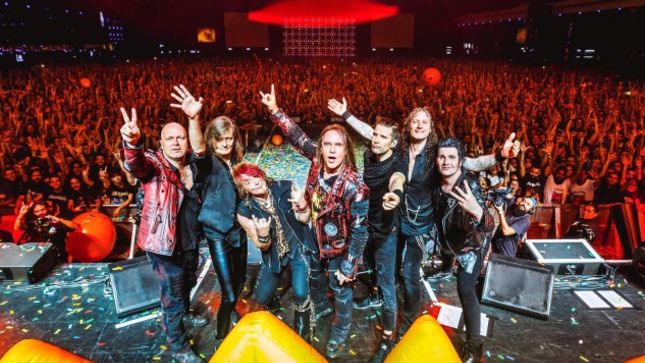 Jimmy Kay from Canada's The Metal Voice recently spoke to Helloween guitarist Michael Weikath. Weikath spoke about the band reuniting after all these years , the upcoming writing sessions of the new album, and the band's new live CD / DVD / Blu-Ray, United & Alive in Madrid, which will be released October 4th on Nuclear Blast

On healing old wounds and reuniting with Michael Kiske and Kai Hansen:

"We have a different outlook and we have a different upbringing. That whole school system in Germany is quite different, and Michael Kiske has this new-age approach towards things, and he wants to be a wise character. He's thinking karma and stuff. I'm doing the same you know. Kiske and I used to be best friends in the past; it would be meager, puny and weak if we couldn't sort out any issues for a reunion. We just needed a little talk. We know each other so well from the past. We both agree there were some kind of demons in the past that screwed everything up. We don't even know today how we both got onto the wrong track and became so negative towards each other. It's like a big burden that you have to carry around with yourself for no use at all, just to be fucking right, just to be on the cool side, just to be Mr. Right. Names come to mind of other famous bands where you can say they will never have a reunion. Plus, we have a very good management who put us together in the past with Kai Hansen and that would have been near to impossible if you have separate managements."

On making a new album with the current seven-man line-up:

"There will be five guys writing. Michael Kiske is not going to compose much except whatever he thinks will get into consideration. The pre-production we are going to start at the end of October 2019, that would entail three months where we will arrange, brainstorm, try things for new song material and then whatever is cool is going to be kept for the main recordings later."

One whether Pumpkins United with Kai Hansen and Michael Kiske is short term or long term:

From October 4, we can all revisit the Pumpkins United World Tour every night without even leaving the couch. What is served, is no less than the greatest hits from 30 years and a breakneck trip through the entire Helloween repertoire - a 14 month metal quake. In other words: Clear the ring for the next round of Pumpkins United madness. Watch "Forever And One" from the release below.

With the releases of United Alive & United Alive In Madrid on Nuclear Blast, the band presents stunning audio and visuals of the epic tour.

Every single solo, every spontaneous gesture, and every emotional encore of the Pumpkins United World Tour is evoked and made immortal. Band interviews and plenty of background material included. The artworks for the various formats were once again created by photographer and art designer Martin Hausler, who of course stuffed lots of previously unreleased live images into the 36-page booklet and high end packaging.

The DVD/Blu-Ray United Alive captures the phenomenal sets with recordings from Wacken in front of 75,000 metal heads, 14,000 fans in the Madrid arena, and topped off by the legendary gig at the Espaço das Américas in front of 8,000 fans in São Paulo. In total, there's over three hours of live material in stereo and premium 5.1 surround sound plus a movie compilation with the essentials of the concert’s LED content, all cartoon clips of Seth and Doc, further surprises, and the very personal 30-minute band interview about the past, present, and future.

As pure as it gets - the Live CD/Vinyl United Alive In Madrid has nearly three hours of unbridled Pumpkins live pressure up its sleeve - including bonus tracks of the shows in Prague, São Paulo, Wacken, and Santiago de Chile.

United Alive & United Alive In Madrid will be available in the following formats, and can be pre-ordered here.

- 5 Disc Vinyl Box
Live concert Madrid plus bonus tracks: "March Of Time", "Kids Of The Century", "Why" and "Pumpkins United"