IRON MAIDEN: Album By Album - New Book From MARTIN POPOFF To Be Released In October 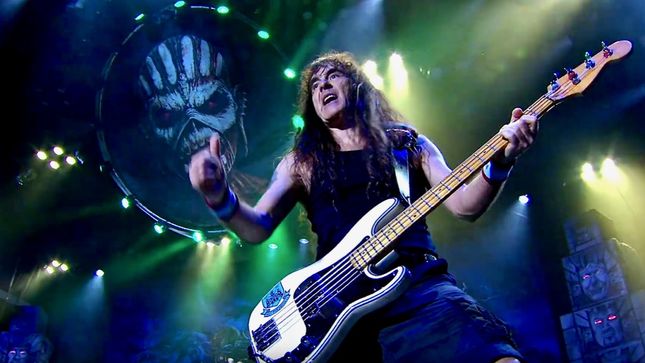 Required reading for all Iron Maiden fans, Album By Album is a compendium of in-depth, entertaining, and profusely illustrated conversations about all sixteen of the legendary metal band’s studio albums.

This new book from prolific rock journalist Martin Popoff pays tribute to the Iron Maiden’s studio discography through a series of in-depth, frank, and entertaining conversations about all sixteen of the legendary heavy metal band’s studio albums. Inside, the author gathers together metal journalists, authors, and musicians, who offer insights, opinions, and anecdotes about every release.

Maiden’s fanbase is large, diverse and enduring, and that goes for the line-up Popoff assembled to break down each Maiden studio release. Among those weighing in are musicians Marty Friedman, Mike Portnoy, Matt Heafy, Nita Strauss, Ahmet Zappa and former Maiden singer Blaze Bayley. Rocker and pro wrestler Chris Jericho is here, along with journalists “Metal” Tim Henderson, Rich Davenport, Jimmy Kay and other metal and Iron Maiden experts.

Together, the conversations comprise a unique historical overview of the band, covering everything from early albums with original lead singer Paul Di’Anno; the songwriting of founder and bassist Steve Harris; the impeccable talents of drummer Nicko McBrain and guitarists Dave Murray, Adrian Smith, and Janick Gers; mega tours undertaken in support of the LPs; fights and drama within the band; and much more.

The resulting insights, opinions and anecdotes explore it all, starting with the band’s debut at the vanguard of the New Wave of British Heavy Metal to breakthrough iconic releases like The Number of the Beastand Powerslave. Popoff also includes loads of sidebars that provide complete track listings, details on album personnel, and information on where and when the albums were recorded. Every page is illustrated with thoughtfully curated performance and offstage photography, as well as rare memorabilia.

For life-long fans of Maiden to the newer and curious fans wanting to know more about the legendary British band’s recorded output, Iron Maiden: Album By Album is a book every Maiden fan will want on their bookshelf.