IRON MAIDEN Bassist STEVE HARRIS - "It Becomes More Of A Reality That One Day We May Not Be Able To Tour Anymore, But I Don't Want To Think About That" 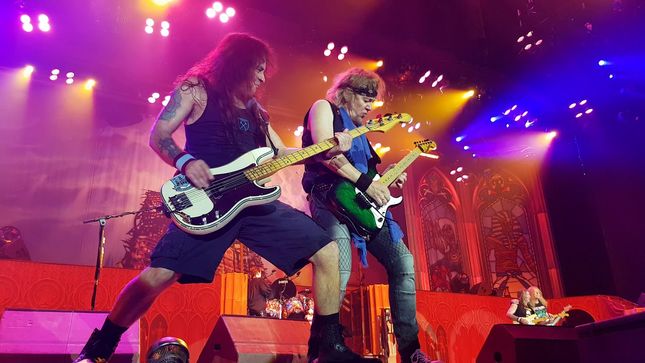 Speaking with Metal Hammer, bass legend Steve Harris discussed the future of Iron Maiden. Following is an excerpt from the inteview.

Harris: "I’m pretty damn sure we will do another album, and then all well and good, we’ll go out on tour to back that up. How long that will go on for, I don’t know. We’ve been talking about this kind of thing for the last 20 years, but as time goes on, it becomes more of a reality that one day we may not be able to tour any more, but I don’t want to think about that. You’ve got to enjoy the moment.”

Steve Harris will bring his side project British Lion to Canada for the first time. Dates begin in Toronto on November 1st, stopping in Kitchener, Ottawa, Montreal and Quebec City.

Harris formed the band in 2012 and released a debut album with touring concentrated mainly in Europe. With a second album in the works, British Lion has announced dates in Brazil and Japan and are excited to add the five Canadian shows to their schedule.

Harris has invited his long time friends in Coney Hatch to be special guests on the Canadian dates, making this the first time since Iron Maiden’s 1983 Piece Of Mind tour that both Steve and Coney Hatch will share the same stage.

Coney Hatch returned in 2013 with the release of Coney Hatch 4. “We’re honoured that Steve invited us to be part of his first ever British Lion Canadian tour, it’ll be like Deja Vu,” said Andy Curran, bassist and lead vocalist of Coney Hatch.

The first date confirmed is November 1st at Queen Elizabeth Theare in Toronto, ON. Tickets on sale Friday, June 1st at 10 AM. The remaining dates will be announced shortly.