IRON MAIDEN Bassist STEVE HARRIS - "We Do Have Difficulty Writing Shorter Songs These Days; I Don't Know Why That Is" 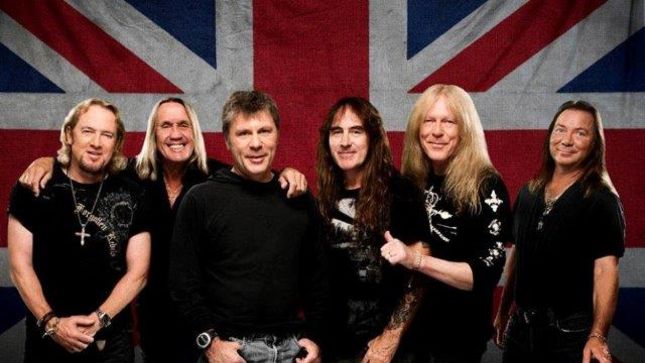 Goldmine's Patrick Prince recently caught up with Iron Maiden bassist/founder Steve Harris to discuss the band's new album, The Book Of Souls. An excerpt from the interview is available below:

GM: You’ve claimed that the songwriting process was refreshing for this new album. Why is that?

Harris: "Normally we would go into rehearsal where we would write and rehearse it and then we’d go and record afterward somewhere else. But this time we did it all in one place, so it was good because we’d write and rehearse a song and then put it straight down. Which makes a lot more sense, really, in a lot of ways. I mean, we actually really enjoyed it like that. But I think most people know that studios are so ridiculously expensive that most bands would rehearse in a rehearsal room first and that was normal. This time around we decided to go straight in there, and partly because there was going to be another band rehearsing (in the rehearsal room). We thought, we can’t be somewhere where we’d write a new album and have someone else listening to what we were doing next door, you know (laughs). So we decided to go straight into the studio, which is more private. It worked great. I think when we do another album, we’ll do the same thing again."

GM: The opening track “If Eternity Should Fail” reminds the listener of the influence that classic prog rock has had on your songwriting. In later years, do you think Maiden pushes itself creatively like those progressive bands did in the past — no-holds-barred, expansive and open?

Harris: "Well, that’s always been the case, really. We’ve always done what we wanted to do right from the first album, so there’s no difference there. It’s just that we do have difficulty writing short songs these days. I don’t know why that is. It’s just the way it evolved. There’s no real reason besides the fact that we do have all kinds of influences. Some of them being prog kind of stuff. But we’re not trying specifically to be like anything other than just writing what the songs we feel are right at the time. You know, we never really know what we’re going to write next. Which is part of the excitement when we go in and do a new album. No battle plan, we just go in and do it and what comes out, comes out. It’s only afterward, when we do interviews, when we try to analyze it. We don’t analyze what we do. We just do it."

The Book Of Souls has given BMG’s recorded music operation its best first-week album sales in the US market since the Bertelsmann-owned firm relaunched as an independent in 2008, reports Music Business Worldwide.