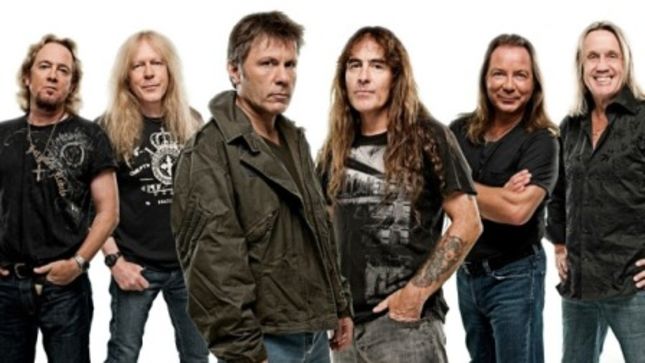 Gearing up for Iron Maiden's April 29th show in Christchurch, New Zealand, Stuff.co.nz caught up with frontman Bruce Dickinson for an in-depth interview. An excerpt from the discussion is available below.

Since his return in the late '90s, the six-piece lineup has put out seven studio albums, including its latest one, The Book of Souls. To make the album, Iron Maiden flew into Paris in 2014 from their homes scattered all over the world – England, Florida, Hawaii and Los Angeles – spending 2.5 months in a recording studio overseen by their longstanding producer, Kevin Shirley. It's like a family reunion when the band reunites, laughs Dickinson, who says that with The Book of Souls they did things a bit differently, writing, rehearsing and recording until it was done. So no sending music back and forth via the net then?

"No, we're quite old school. We have an acoustic guitar and a taperecorder. We all rock up and hang out. We're like family."

With his trademark singing style, a voice that once earned him the nickname "The Air Raid Siren", he's also renowned for giving energetic performances and connecting with the crowd. In a performance in Florida last month, he leaped and moved his limber, lean frame in front of cauldrons of fire in a stage set that is the band's most impressive yet. While the band's guitarists flicked long hair over their guitars and black Iron Maiden t-shirts, Dickinson stood out with his short, cropped hair, tanned trousers and black turtleneck jumper. When he spoke, his words struck a chord at a sold-out concert in New York.

For their New Zealand gigs, Iron Maiden have released an All Blacks-themed t-shirt as a tribute to their Rugby World Cup victory last year.