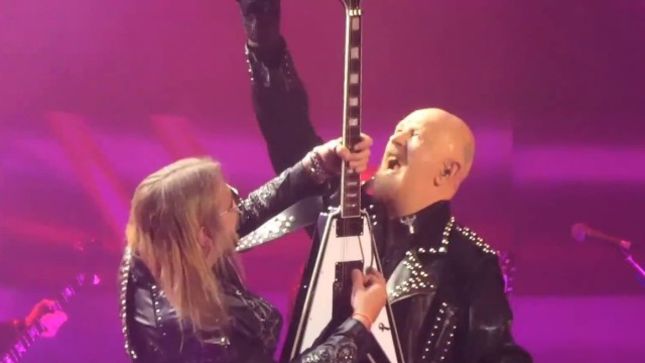 Speaking with BackstageAxxess, Judas Priest bassist Ian Hill discussed the band's current tour with Deep Purple, and the band's relationship with former guitarist K.K. Downing, particularly in the wake of guitarist Glenn Tipton stepping back due to his battle with Parkinson's disease. There has been speculation that Downing would be asked to rejoin the band, even by Downing himself, which clearly was not the case.

Ian Hill: "When he retired, we took on Richie (Faulkner), so he's playing all Ken's parts. So, it's not Ken's parts that are missing, it's going to be Glenn's parts that he would be playing. Really, Ken, what's he going to do? Come over to my side of the stage and play Glenn's parts? I just don't know where he was coming from with it. I think it was a bit of mischief on his behalf, to be honest. It wasn't his job - if you know what I mean - that had become vacant. It was Glenn's.

Glenn and Ken are two excellent guitarists, but both are completely different in styles and sounds, and for Ken to be playing Glenn's parts anyway, it really wouldn't have sounded right. We went for Andy (Sneap). We never thought about Ken for that reason. Like I said, I don't really know where he was coming from with it."

VintageRock.com recently spoke with former Judas Priest guitarist K.K. Downing about his new autobiography, Heavy Duty: Days And Nights In Judas Priest. he also discusses his favourite albums from the Judas Priest catalogue. Following is an excerpt from the interview.

Q: Did writing the book provide a sense of closure concerning your time in Judas Priest?

Downing: "Yeah, I think so. I guess it’s the same with any long term relationship — whether it’s a husband or wife, or father or son or whatever — you spend enough time together, and idiosyncrasies show up. I guess there was no particular right or wrong — some people have more tolerance than others, and it takes a bloody miracle really to stay together for 40 years. Someone has to give. And it has to be give and take. But inevitably, it becomes a bit of an imbalance, and I like to think that democracy is always the best policy. And there wasn’t enough of it there, I don’t think.

But it kind of happened — Rob and Glenn went off and did their lengthy solo careers, and that became a bit disruptive. I didn’t even mention that in the book. But Rob actually released two albums and did his own tour in the exact year before I left. And then when they said, “KK, we want you to start writing for a five-track EP,” I went, “Fucking no way in hell! Rob has just released two albums in the last year, and we are only releasing an EP? Something is not right.” Enough was enough really, and I bailed out there. And like I said in the book, I tried to put it as diplomatically as I could. But in a nutshell, enough was enough, really. And that was it."

In the clip below, Trunk Nation host Eddie Trunk talks about Downing's forthcoming book, sharing a couple topics that are addressed.

K.K. Downing's autobiography is due for release on September 18th via Da Capo Press. Heavy Duty: Days And Nights In Judas Priest is now available for pre-order via here.

Downing has released a shot of the back cover of the book, which can be viewed below. 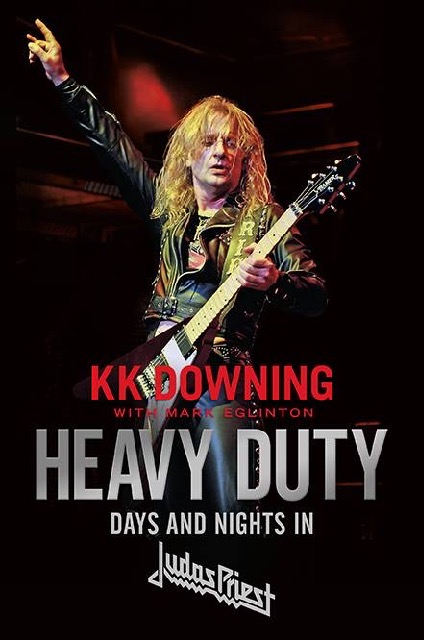 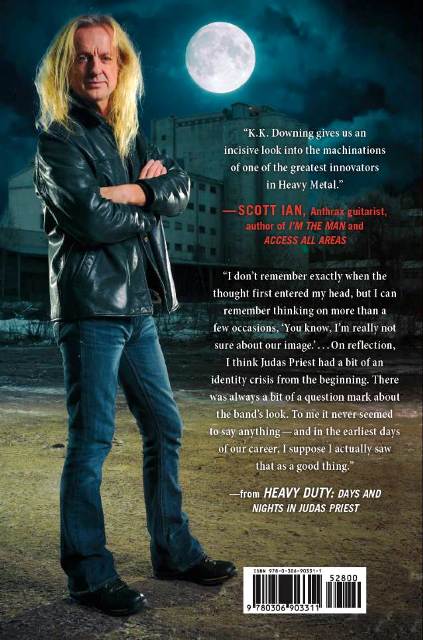 A book synopsis states: Judas Priest formed in the industrial city of Birmingham,

England, in 1968. With its distinctive twin-guitar sound, studs-and-leather image, and international sales of over 50 million records, Judas Priest became the archetypal heavy metal band in the 1980s. Iconic tracks like “Breaking The Law”, “Living After Midnight”, and “You’ve Got Another Thing Coming” helped the band achieve extraordinary success, but no one from the band has stepped out to tell their or the band’s story until now.

According to Billboard, a share of the royalty rights to over 130 Judas Priest tracks, including metal hits "Breaking The Law", "Living After Midnight" and "Painkiller," are being put for sale, following the demise of K.K. Downing's luxury golf resort.

Downing is thought to have invested millions in developing Astbury Hall, located in Shropshire, England, and its 18 hole, 71-par golf course in the hope of one day attracting the Open Championship. That dream ended last fall when the business fell into administration (similar to Chapter 11 insolvency in the U.S.) and the 320-acre estate was put up for immediate sale with an asking price of more than £10 million ($13.5 million).

At the time, administrators blamed "tougher economic times within the wider corporate hospitality market" for placing "unsustainable pressure" on the business. Astbury Hall and its golf course has since been acquired by new owners.

The next part of the bankruptcy process involves the sale of Downing's share of the royalty rights to 136 Judas Priest songs, which administrators FRP Advisory LLP say generates between $340,000 and $400,000 per year.

Read the full story at Billboard.com.