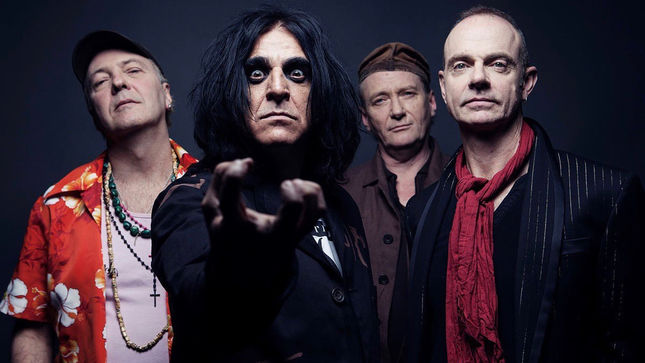 Killing Joke have announced that now, 40 years down the line, with the original line-up reunited, their current worldwide label Spinefarm Records is undertaking a series of official reissues.

These releases commence with four beautifully presented titles on December 11 – the Killing Joke album, the Pandemonium album, The Singles Collection: 1979 - 2012 set, and the” I Am The Virus” 12” single.

All be available as vinyl packages (plus a Special Edition CD, in the case of Pandemonium), with the audio having been lovingly prepared for vinyl, and CD, by Tim Turan from Turan Audio Ltd., a hugely experienced and respected UK engineer.

Killing Joke – The classic, massively influential debut, featuring such key tracks as “Requiem”, “Wardance” and “The Wait” (covered by Metallica in 1987). The gatefold artwork has been lovingly recreated by Mike Coles, the sole addition being a striking silver pantone on the sleeve. Killing Joke will be released on Blackand& Bi-Colour vinyl.

Pandemonium – Originally released in 1984 and partially recorded inside the Great Pyramid of Giza, this is KJ’s most successful album to date. This Double LP version – featuring revised cover artwork from Mike Coles, plus lyrics and new sleeve-notes – stays true to the original track-listing, with both of the celebrated Cybersank remixes for “Pandemonium” and “Millennium” included. Pandemonium will be released on Black and Coloured vinyl, with a CD version (complete with slipcase) available in tandem.

The Singles Collection: 1979 - 2012 – Featuring 33 tracks, including “Wardance”, “Eighties”, “Love Like Blood”, “Millennium” and ‘”Pandemonium”, this chronological collection of the band’s singles has never previously been pressed onto vinyl. This 4 LP version will be available as a deluxe gatefold package, with Black and Coloured vinyl variations available.

“I Am The Virus” 12” Single – Given the amount of attention recently directed towards this track (from most recent studio album. Pylon, 2015), it’s now being made available as a Limited Edition Collector’s Single, complete with artwork from Mike Coles and previously unreleased Dub Remix by Youth – the ‘Apocalyptic Meltdown Dub Remix’.

Now standing in a peerless position when it comes to music, prediction & prophecy, Jaz Coleman, Geordie, Youth & Big Paul, the original Killing Joke personnel, are currently delivering the best and most relevant material of their career, with no mellowing or softening of the edges getting in the way.