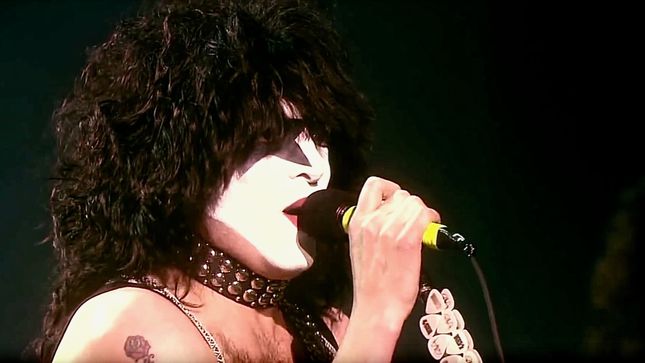 KUTV reports that a video went viral this week featuring a 2012 interview with KISS, who demand the interviewer, identified as Gustavo, remove his Iron Maiden t-shirt, saying "It doesn't show respect."

According to the report, as Gustavo begins the interview, Paul Stanley leans over, points to the Iron Maiden logo on Gustavo's shirt and says, "I have a question to ask. KISS is K-I-S-S. This does not spell KISS, Gustavo. You made a big mistake."

Gustavo expresses that he chose the shirt specially for the interview.

"I don't want him wearing an Iron Maiden shirt," bassist/co-lead singer Gene Simmons says to someone off screen. Simmons then suggests to Gustavo that he turn the t-shirt inside-out or wear it backwards.

"Gustavo is very smart," Stanley jokes. "That's how you get a free KISS t-shirt, you show up with the wrong shirt."

Gustavo fights back, asking "Do you guys want every journalist to wear KISS t-shirts when doing KISS interviews?" The band responds, saying that it's about courtesy.

Read more at KUTV, and watch the video below: