KISS Nearly Launched An NBC Cartoon In 1979 - "Hanna-Barbera Had The Thing Ready To Go... Bill Aucoin Put The Brakes On It," Says KISStorian BOB NASH; Audio 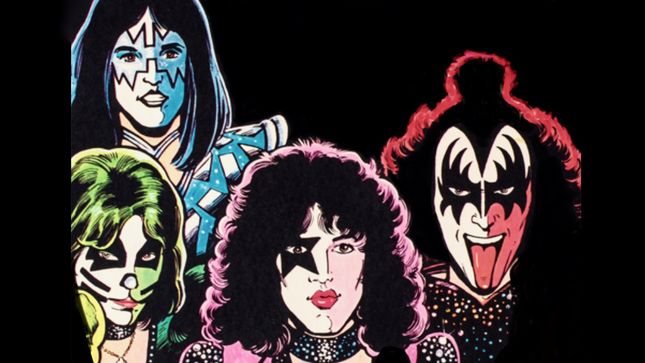 In the new episode of the 80’s Glam Metalcast, it’s a KISS themed episode with “KISS What If’s And Why’s” with special guest, KISStorian Bob Nash. Bob reveals some cool KISS revelations. Listen below.

There is all kinds of unseen footage for an Elder box set: "Here’s why I would do an Elder box set. The same old stuff has been out there on YouTube for years, but there are more things out there that the band doesn't have. Most fans have seen KISS perform 'The Oath', 'World Without Heroes', and 'I' from the TV show Friday's. That afternoon of the Friday's performance was also filmed. During that footage, Paul is teaching Ace the guitar solo to 'The Oath'. It's a train wreck! It's crazy because Paul has to keep stopping and showing him parts. That has never been released. The soundcheck itself is unbelievable. Some recent recordings have also surfaced from Ace in the hole studios. These are fantastic and its only Ace, Gene, Eric Carr, and Bob Ezrin. You can hear them talking between stuff. This recording has never seen the light of day. I think fans would pay through the nose to see and hear this stuff!"

Gene Simmons confirmed that KISS almost had a cartoon in 1979: "The story is that Hanna-Barbera had the thing ready to go, but Bill Aucoin put the brakes on it. He didn't wan't the band to get overexposed in 1979. Gene Simmons told me there is concept art of it. They were going to do it on NBC and they were in the Dynasty costumes. Gene said he owned all the original artwork that was done."