KORN Frontman JONATHAN DAVIS Issues Statement Regarding Wife's Death - "She Had A Very Serious Mental Illness And Her Addiction Was A Side Effect; I Loved Her With All Of My Being" 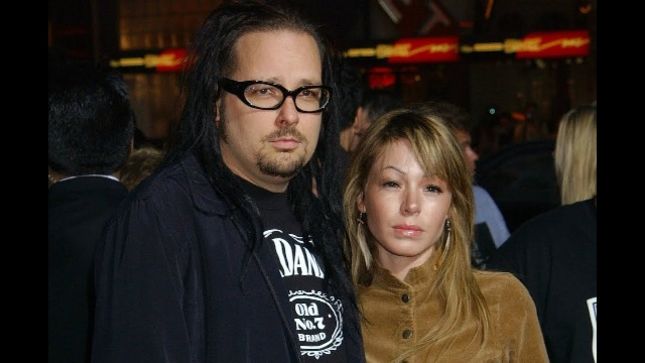 
Jonathan and Deven married in 2004 and had two kids together, Pirate and Zeppelin. No cause of death has yet been revealed.

TMZ has further reported that Jonathan filed for divorce in October 2016, citing irreconcilable differences. A domestic violence restraining order was filed by Jonathan on August 17th, effectively blocking any child custody or visitation by Deven. In his court declaration, he alleged Deven had been struggling with drug addiction (prescription and illegal narcotics) for more than 20 years, and as a result she was neglecting their children and causing them emotional harm. Deven had reportedly been to rehab six times and "is constantly under the influence of the nitrous oxide, cocaine and Norco."

Jonathan claims when Deven binged on drugs she would "routinely bring home unsavory characters, including strangers. Some of these people are random fans of my music who she allows to come into the house, go into the master bedroom closet and try on my clothes."

According to doctors, Deven had been in a sober home but went AWOL and hadn't been seen for a week.