LIV KRISTINE - "I Was Fired From My Own Band; A Sudden Action, And Well Planned" 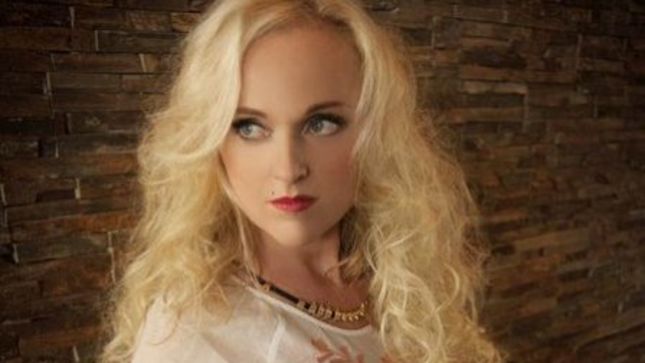 Leaves' Eyes vocalist Liv Kristine - who launched the band in 2003 - was recently replaced by Finnish singer Elina Siirala, who made her live debut with the band on April 17th at the Hammersonic Festival in Jakarta, Indonesia. The band has been raked over the coals since the news broke, and fans have been getting two sides to the story from Leaves' Eyes and Liv Kristine respectively.

"Since we are fed up with the lies on social media, and as we promised yesterday, here is the proof that we tell you the truth about what is going on. Here you can read the signed protocol documents (English and German) - certified by lawyer Frank Dehn - which proves that the news about the protocol from the mediator of our crucial band meeting is accurate and correct in every way. Furthermore the protocol shows that the decisions were made together! Since January this year Liv’s exit from the band was already pending. We hope, we have finally cleared up the situation for every one now. Like posted before we wish Liv all the best for her future." 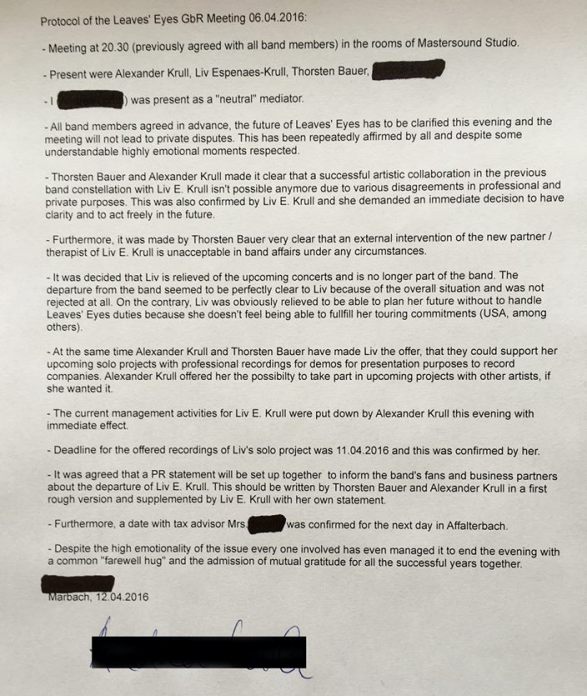 Liv has since responded to her former bandmates' actions:

"Dear Liv Kristine Family, 1200 messages . you are amazing! I have read all your heart-warming words and good wishes. This is the essence of our true and honest relationship. So much love to my fans and friends!

Still, I am horrified - how can someone put a protocol not approved on by me online, without asking me for permission? I don't see the necessity in this. Anyway, it puts things straight: I was fired from my own band that day. A sudden action, and well planned.

Let the past be past! Today I talked with Raymond (Theatre of Tragedy) for further cooperation. Are you ready? Who's in?"

The original statement released by Leaves' Eyes regarding Liv's departure is available below, followed by Liv's much different take on the situation.

"We are just back from a great weekend in Indonesia. Our first show with Elina went awesome! Despite a heavy tropical storm before the gig, 21,000 people showed up in front of the stage!

We understand that many fans and friends are surprised and shocked about the change in our band. We all know Liv had an important role for the band in the past, and we understand people are sad as it was not an easy decision for every one involved. But since a lot of hateful and disrespectful comments are in the social media, we would like to take the opportunity to make some points very clear: Leaves' Eyes has always been a band, and not a project, nor a Liv Kristine solo project at all. We always worked as a team in Leaves' Eyes. In the last decade Tosso (guitarist Thorsten Bauer) and Alex (Krull, Leaves' Eyes co-vocalist and Liv's husband) wrote the music for Leaves' Eyes and Liv took care of the lyrics.

Liv's solo project is called Liv Kristine. We supported Liv also in her solo career, writing music, recording and producing albums and doing management in the past.

The decision to part ways with Liv was taken by all Leaves' Eyes members, including Liv. A mediator — a friend of Liv and Alex — was at the band meeting who can witness that the decision of parting ways was agreed by all members. Liv was happy to have the opportunity to plan changes in her future life and she does not have to go on tour so much anymore. The idea to go separated ways came up already in January. Elina was not part of this decision or process. It was also agreed to help Liv for her solo project, Liv Kristine, and record her new demo songs and her further projects at the studio just like in the past.

Please respect the privacy of Liv and Alex. Disrespectful postings and bashing is harming their family situation and their son Leon. Liv and Alex don't want to split fans — don't give false rumors, haters and bashers a chance! At the moment, we can't tell you more details as legal actions are in process.

To our worldwide fans who are there for the music and not the gossip: Let the music talk!

We are looking forward to present new material with Elina soon! Stay tuned for news of our upcoming video clip, music and tour updates."

"Dear fans and friends, without you I wouldn't have the strength to continue with music. What you all have done for me with all your endless support and passion keeps me going on in these difficult times. Thank you for warning me concerning new postings by someone in Leaves' Eyes, done to harm me and make my situation even worse.

I have nothing to hide, nothing to fear. I was told a bit longer than a week ago that I am not preferred as the band's singer for further tours and recordings anymore. I asked for the situation concerning Indonesia and the soon-to-happen up-coming shows. The answer was 'no.' I asked if there's a replacement and I got no clear answer.

I can't believe this process happened behind my back, parallel to a huge disappointment in my private life.

A few days later, there certainly was a replacement. I must say — that was 'quick'!

I still see Leaves' Eyes as 'my baby' and I will miss playing these gigs, feeling the good vibes, sensing the real Norwegian Viking power with the audiences. Inside my heart I will always treasure Leaves' Eyes for all the good music, tunes, themes, concept and true Viking power. The melodies I used to sing will always stay alive in my ears.

I can't wait to unveil good news for you soon. There will be good news coming from Norway!"