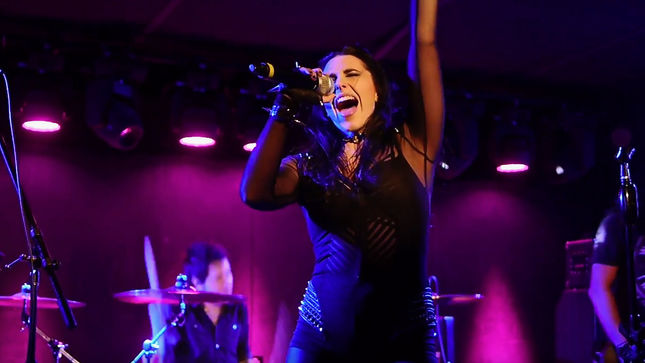 Madame Mayhem is a true rocker with an eclectic style in every aspect of life - merging theatricality with hard-hitting, rocking tunes. And coming this fall, fans worldwide will get the opportunity to experience this larger-than-life figure on a concert stage, as Madame Mayhem will be hitting the road with Austin John Winkler (formerly the voice of Hinder) and Smile Empty Soul this fall on the Love Sick Radio Tour in the US, before heading over to Europe and the UK for dates with Fozzy and Hardcore Superstar. A trailer for the tour can be found below.

“Excited to be part of this leg of the Love Sick Radio Tour with Austin John Winkler and Smile Empty Soul, presented by M7 Agency,” says Madame Mayhem. “I love Austin's voice, and grew up listening to Hinder, and am a fan of Smile Empty Soul - ‘Bottom of a Bottle’ was a song that helped me when I was frustrated or upset growing up, and I love that song, so being able to watch them play every night after our set is going to be a blast. I am also super excited we get to perform in some areas we haven't had the chance to play live for yet. Hope to see new and familiar faces out in the crowd. It's also great that this run is right before we head over to the UK and Europe with Fozzy and Hardcore Superstar. Our sets will have the new not yet released songs as well as songs out now, so it will be cool to introduce these new songs to the world all jam packed in a couple of months!”

The singer has performed across the United States to packed rooms, including B.B.King Blues Club, The Roxy, The Viper Room, Bowery Ballroom, Knitting Factory, a residency at The Cutting Room, the Bluebird Café during Grammy nomination week, Shiprocked Cruise 2017, Sunfest 2017, Sturgis Buffalo Chip 2017, and has performed on national tours with renowned and respected artists such as Doro and Mushroomhead.

Madame Mayhem has been covered in both fashion and rock music media worldwide. She made most added on the CMJ Loud Radio Charts with over 60 stations nationally in the United States. And with a new album on the horizon (release date Friday, October 20th), Madame Mayhem is setting the stage for what promises to be a big 2018 with this string of worldwide tour dates in 2017.