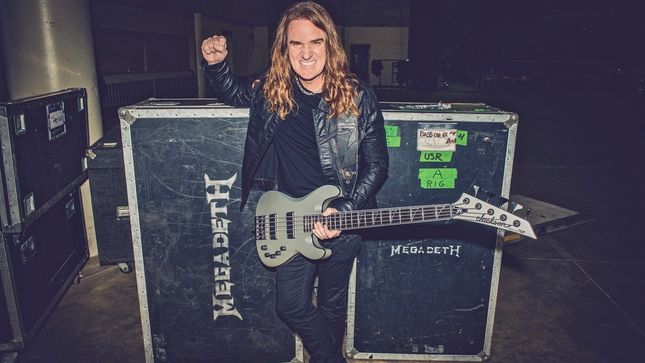 “The content is pretty solid. The manuscript is essentially done; there’s a few little touch-ups and we’ll turn it in. The story has been written because the story has been lived,” says Megadeth bassist David Ellefson, speaking exclusively to BraveWords scribe Aaron Small, about his new book, More Life With Deth.

Expected in “early fall 2019,” via JawBone Press, More Life With Deth will be Ellefson’s second book, which he elaborates upon. “Initially, we thought we’d self-publish it. Then as the story kept expanding, more things in life kept happening that we kept putting in the book… I kind of got my head around the reality of trying to self-publish the thing, and it was a no. I think I should turn this over to the experts who actually know how to publish books,” laughs David.

“With that said, the book publishing business has really changed. There’s things you can do now on Amazon, and all kinds of other places, which is great. You don’t necessarily have to… getting a publisher is kind of like getting a record deal; it’s sort of the same process. You write the manuscript, which is kind of the demo. Then you get the deal, and finish the final master, and the book itself. You’ve got to do the artwork, and all the rest of it. But it’s fun; I love writing! Quite honestly, I was doing an autograph signing at The Days Of The Dead Horror Convention with Charlie Benante (of Anthrax) and Head from Korn; Brian Welch. Brian’s got like three books, I’ve got to get on my game here. This guy’s got books left and right – honestly, Brian inspired me. There’s so much stuff in life to write about; just keep writing man. Keep putting the pen down to paper.” 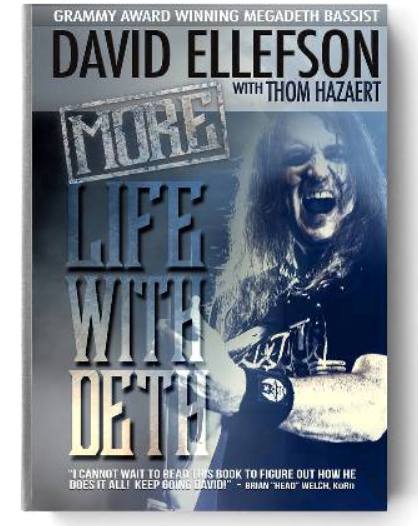 It’s been five years since the 2013 publication of Ellefson’s first book, My Life With Deth. Since then, the bassist – who’s also in Altitudes & Attitude with Frank Bello from Anthrax - has travelled a few miles, played a few shows. “Yeah, and what’s nice about it… whereas the first book was life from birth until 2011 or 2012. This one really picks up, obviously from there until current day. Also, all these other… I call them the Ellefson industries, if you will. The coffee company, EMP Label Group, Combat Records. Even tying back into my life in Minnesota. My father died April 2nd 1994 – the day I got married. My brother passed away from cancer four years ago; then my mother passed two years ago. So, I thought, maybe my life in Jackson, Minnesota is over. It’ll always be a wonderful memory for me of my youth, but maybe life moves on now. No sooner did I say that; I’m literally driving down I-90 heading towards Minneapolis to catch my flight home, and then Megadeth would carry on to do a big South American tour. I’m driving away from Jackson, looking at it in my rear-view mirror. A year later or so, and here we are, back again, with Ellefson Coffee Co. on Main St. in Jackson.”

“It’s really kind of a cool story of a homecoming of a small-town farm boy who goes off to Hollywood, wins a Grammy, and turned out to be pretty good after all. Then to be able to bring it all back home, with them honoring David Ellefson Day. As cool as that is – and it’s incredible, it’s an honor above pretty much anything. But to keep bringing my life back to Jackson; that town did a lot for me getting me off the launch pad. And to be able to bring my life back there to them, so we can all celebrate together is… with the David Ellefson Music Foundation. That to me was the bigger thing. To have a day named after yourself; that’s awesome. But what more can we do with this? We formed a foundation as a way to continue to give music and resources back into the rural areas. That’s where I came from. There’s a lot of great organizations who give to the inner city, the less privileged; but my story comes from the rural area. The rural public schools, education in music; that’s where I came from. I want to see that continue. There’s sports clubs and booster clubs, everybody supports football and the other big sports. Often the music stuff is kicked to the curb, and I want to ensure that doesn’t happen as best we can.”

For the initial My Life With Deth book, Ellefson enlisted author Joel McIver as his co-writer. However, there’s been a change in personnel for the forthcoming More Life With Deth. “Joel and I didn’t work together on this one. Actually, me and my (business) partner Thom Hazaert wrote this book; mostly because we were there (together) on the journey for most of this stuff. Joel and I had talked about doing a book, and even wrote some sample chapters. But Joel is now the editor of Bass Guitar Magazine and Bass Player Magazine. So, he suddenly got super busy, which is great! Joel’s a dear friend and certainly a wonderful ally in the global bass community. I knew I had most of the year (2018) off the road with Megadeth, out of that is where me and Thom created the Basstory shows, and now world tour; as well as writing the book. It’s been a fun and busy year.”

Alice Cooper wrote the foreword for the first book, anybody in mind for the second one? “We have some great participants in this book. Everybody from (Judas Priest guitarist) K.K. Downing to Dan Donegan of Disturbed. It’s kind of like the people before me, and the people who have come after me; we’ve got really nice bookends on both sides of my life. Actually, Alice has some stuff in it himself. As we kind of flush that out, I don’t know who’s going to write the foreword for it, but the actual contributions from my famous rock star friends is really cool. They add some really nice color to the story.”