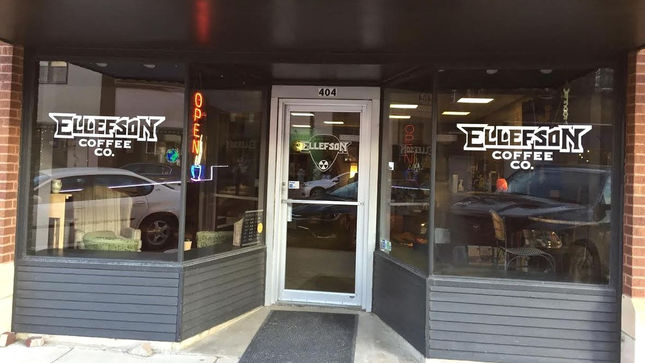 April 7th - 9th, Ellefson Coffee Co., the boutique coffee brand of Grammy-winning Megadeth bassist David Ellefson will hold a Grand Opening for its first brick and mortar Ellefson Coffee Co. shop in David’s hometown of Jackson, MN. In addition to Ellefson himself, who will be in attendance, the event will be co-hosted by special guest comedian, and That Metal Show co-host, Don Jamieson.

Says Jamieson, “He’s (Ellefson) a Grammy-winning musician, thrash metal legend and now… Mega Barista! When David and I spoke about this event I was immediately excited to jump on board. In fact, after a few cups of his Kenya Thrash blend I may just run all the way to Jackson, MN! So come raise a glass of java, and join us for this celebration of Ellefson Coffee.”

Also on display is the “Museum Of Deth” featuring permanently displayed artifacts and memorabilia from Ellefson’s personal collection, including highlights such as David’s Jackson High marching band uniform, as well as memorabilia from other artists including Machine Head, Max Cavalera, Coal Chamber, and fellow 2017 Grammy nominees Korn.

Adds Ellefson, "This is our heavy metal spring break in Jackson! We look forward to hosting some really fun events centering around my career’s roots and history in the area, as well as a chance to see some amazing memorabilia from my friends in music, film and TV.”

Additionally, on Saturday, Ellefson, Hazaert, and Jamieson will be joined by author Adrian Lee as they take visitors on a paranormal exploration of the nearby Loon Lake Cemetery, where Mary Jane Terwilliger was purportedly buried as a youth, and inspired the story of “Mary Jane” from Megadeth’s So Far, So Good…So What album. (And you might want to stop by the Jackson County Historical Society and pay Mary Jane’s headstone a visit, as well.)