METALLICA Drummer LARS ULRICH On Performing "The Frayed Ends Of Sanity" Live - "What The Fuck Were We Thinking?" 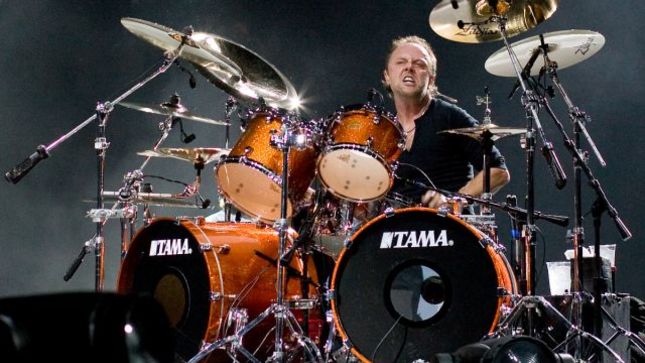 Speaking with Vulture.com, Metallica drummer Lars Ulrich ran though his own take on Metallica, S&M², and what makes a good rock drummer. Following is an excerpt from the interview.

Ulrich: "It’s gotta be around Puppets or Justice. At that time, I was really into experimentation, and I was really into coloring the sound with crazy drum patterns, crazy drum fills, and crazy-weird time signatures, and all kinds of super-sideways stuff. I guess the geekiest of those songs would probably be something like '… And Justice for All', a song like 'Blackened' or 'The Frayed Ends of Sanity'.

'The Frayed Ends of Sanity', we never played live because it was just such a crazy undertaking. And then a few years ago we did a Metallica by Request tour. Every day we were playing like 18 songs that the fans voted on. We weren’t changing the votes or doing any of that crazy shit. I think we were supposed to play in Helsinki and the fans had voted for 'The Frayed Ends of Sanity'. We had like two weeks or something to learn this song. You kind of sit there, 20 years later, with the combination of bemusement and horror on your face and go like, 'What the fuck were we thinking?' the way we used to write these songs. We didn’t know anything about time signatures. We didn’t know anything about counting. It was just the way the drum parts spoke to each other. Some of that stuff just became so headstrong and so cerebral, almost mathlike."

Ulrich: "The counterquestion to that would be 'By whom?' (laughs). It’s hard for me to separate the record itself from the process and the time and place of making the record. So much of what I think about a record of ours, I just think about what we were going through, where we were, what my memories are. It’s hard for me to listen to someone say [does his music journalist’s voice again], 'Oh, listen to … And Justice for All versus listening to Reload.' I can’t listen to these records without putting myself in the spaces I was in. What were we doing? What were the moods? What were the daily ups and downs?

But if the most underrated records, i.e., the least appreciated records, are Load or Reload, then I would say I’m fine with that because I think those are pretty decent records. When I hear songs from either of those records, I’m pretty happy with what I hear. So that means that if the other stuff sits north of that, then that’s a good bar to have. I’m okay with that. I think the longer answer is, I’m pretty much okay with anything and any way people rate any of the things that we’ve done. St. Anger, maybe, is more of a polarizing record. Some people had a hard time with the sound, the brutality of that record. If you have to kind of put them all into a sound bite: Justice, the album without the bass on it. St. Anger, the album without the snare. All this stuff, I’m very okay with any of that. I’m proud of the fact that if nothing else, all these records represent the vision of the moment. We were protective of that vision and we fulfilled it.

Then 10 or 20 years later, you can kind of sit back and go 'Huh?' or 'What were we thinking? What was that about? Why did we make that choice?' or whatever. Generally, I don’t spend a lot of time being analytical. I’m much more interested in what’s calming (laughs) and I’m much more interested in the next record or what the possibilities are for the future. I would say I spend more time in the future, maybe even to a fault, not enough time in the present, and definitely the least amount of time in the past. I even have a standard answer when people go, 'What’s your favorite Metallica?' Before they finish that question, I would say, 'The next one.' If I’m not more excited about the next one, what’s the point of making it?"