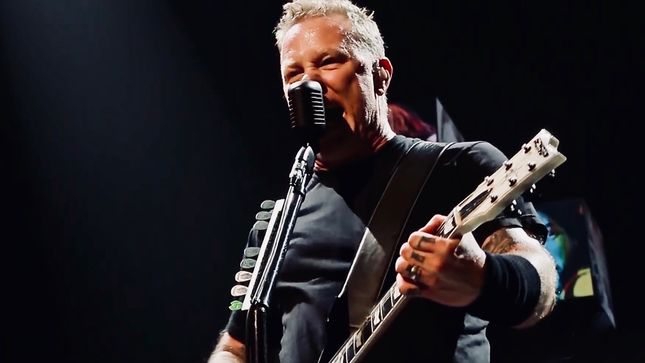 In the new video below, shot at Metallica HQ in San Rafael, California, James Hetfield performs the opening riff of the Ghost song "Cirice", which was featured on Ghost's 2015 album Meliora.

Ernie Ball and Metallica recently announced the winners of the Hetfield + Hammett Experience contest. The three grand prize winners won a trip to meet James and Kirk at Metallica HQ, the band’s inner sanctum where they record, write, and houses memorabilia from their 30+ years of touring worldwide.

Trevor, Kim, and Anthony had the opportunity to pick the metal masters’ brains, hear stories from the road, and learn invaluable lessons about their music gear, playing techniques, and even personal stories with an exclusive Q&A. Check out all of the behind the scenes footage.

Word has come down that Metallica, who recently completed a 24 date European tour, will return to Europe in May 2019 for a stadium tour. The band has issued the following update:

"WOW! As another amazing run of European shows comes to an end, we are a little speechless (when does that happen?) and stunned by the overwhelming response and outpouring of love you have all shown us! After 39 shows in 29 cities in front of 650,000 of you crazy die-hard ‘Tallica fans, we'll be packing up our gear and heading home for the summer.

Along the way, you helped us break attendance records across the continent 29 times, sometimes breaking the record from show number one in a venue just two days later with the second show! It is staggering to us that all of this is still happening after 37 years as a band, and we could not be more honored.

Lucky for us, we’ll be back!! Look for info here in September about our return in May of 2019 for a run of stadiums through August. And already we cannot wait! Until then, THANK YOU!!"