MICHAEL SCHENKER Explains Why He Turned Down Offers From OZZY OSBOURNE, MOTÖRHEAD, DEEP PURPLE, And THIN LIZZY - "I Had The Vision Of Focusing On Pure Expression"; Audio 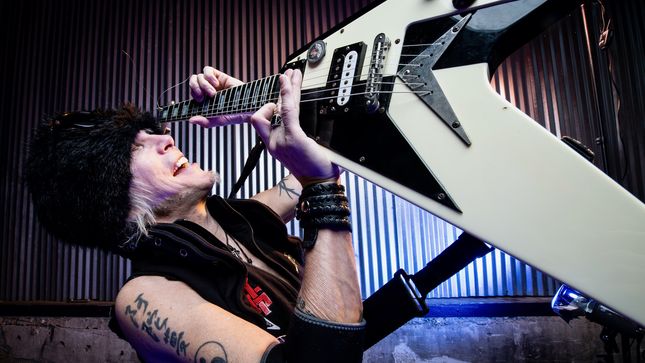 The Metal Voice spoke to guitarist Michael Schenker as he prepares to release the new MSG album, Immortal, on on January 29 via Nuclear Blast. Schenker also spoke about Eddie Van Halen, and why he declined so many major bands over the years as lead guitarist. Watch below.

Discussing the time he was asked to join Deep Purple, Schenker reveals: "In 1993 I got a phone call, I was the first person to be chosen. You have to remember me and Ritchie Blackmore have so many parallels, everyone that leaves Ritchie Blackmore joins Michael Schenker, it's the funniest thing. There was always a conversation in Deep Purple and Ozzy, that's why Ozzy called me up and asked me to join. I was always the first choice but I declined and I must say I'm the kid in the sandbox just enjoying playing. When I get these offers from Thin Lizzy, Motörhead... I always decline because I don't want to copy, I want to do pure self expression. I declined all these bands because I had the vision of focusing on pure expression. I cannot follow a bunch of people looking for something that I have already finished with. My own vision is more important."

MSG is a legendary name. After two phenomenal records under the guise of Michael Schenker Fest, a true guitar hero is returning to his roots. By forming Michael Schenker Group (MSG) back in 1979, Michael Schenker laid the foundations for one of hard rock’s most glorious solo careers of all times. And while nobody expected anything less from a former guitarist for Scorpions and UFO, it’s close to impossible mentioning everything Michael has built over the past 50 years, or the countless people he influenced or played with. This, truly, is the stuff that hard rocking myths are made of.

“I never looked back,” is how Michael dryly sums up an extraordinary career. Due to this mindset, he only realised much later what a huge impact his playing had made on the world of metal and hard rock. Very few guitarists can be cited as a primary influence for the likes of James Hetfield, Kirk Hammett, Dave Mustaine, Dimebag Darrell, Slash or Kerry King. However, to understand Michael Schenker means to understand one primary thing: he’s not here to be worshipped or adored, he’s not here to get rich, he’s here to play. And at 65, he’s doing it with the same swagger, verve and dizzying artistry as always. “I’m still 16 in my head,” he laughs.

Right in time for his 40th anniversary as a solo artist and his 50th birthday as a musician, he resurrects the immortal Michael Schenker Group. Immortal is also the name of his new album, recorded by likely the strongest line-up in his long history. Its a lightning bolt of an album that sounds fresh, bloodthirsty and agile. Immortal showcases the gargantuan vocal talents of Chilean hard rock prodigy Ronnie Romero (Rainbow), backed by singers Ralf Scheepers (Primal Fear), Joe Lynn Turner (ex-Deep Purple) as well as Schenker’s brother in arms, Michael Voss (Mad Max) who again produced the record alongside Michael Schenker – flawlessly, punchy and at full steam as if their very lives depended on it.

Michael Schenker doesn’t live to play, he plays to live, and there’s no better way of summing up his relationship to his music than this – now for half a century and counting. The most emblematic representation of this relationship is the monumental closing track “In Search Of The Peace Of Mind”, a new recording of the very first song he ever wrote. “I composed this track in my mother’s kitchen back when I was 15,” he looks back half a century and smiles broadly: “The solo is just so perfect, I wouldn’t change a single note even today. This is the most important song of the last 50 years for me. It’s what started it all.”

When it finally got released in 1972 on the Scorpions’ debut Lonesome Crow, Schenker had already moved on to UFO. What followed were several decades of pure hard rock ecstasy on and off stage, featuring a rotating cast of stellar players, always pressing the pedal to the metal. Now, in 2020, he reaps what he sowed. Alongside many of his peers, friends and contemporaries, he is celebrating 50 years of hard rock – fittingly with an album that is something like a zeitgeisty reminiscence of everything he’s ever done. The massive midtempo smasher “Don’t Die On Me Now” sees Joe Lynn Turner going all in, Ronnie Romero works his magic in “Knight Of The Dead” while Michael Voss cuts a grand figure before the microphone as well as behind the mixing desk on the furious second single “After The Rain”.

Towering above them all, Michael Schenker and his guitar prove they’re truly and utterly invincible. The celebrated icon pulls out all the stops – including his legendary “howler”, the fabled magnet he’s used on his fingerboard for a while now. And here’s yet another thing that’s just so archetypically Schenker, when bringing up his fiery and dedicated performance on “Immortal” he nonchalantly shrugs it off: “I simply played from the heart, as always.” This, dear Michael, is the understatement of the year – all the more so for a record that is already one of the top contenders for hard rock/metal album of the year.