MYLES KENNEDY Talks Working Relationship With SLASH - "He, In A Lot Of Ways, Is A Kindred Spirit And He Lives To Play" 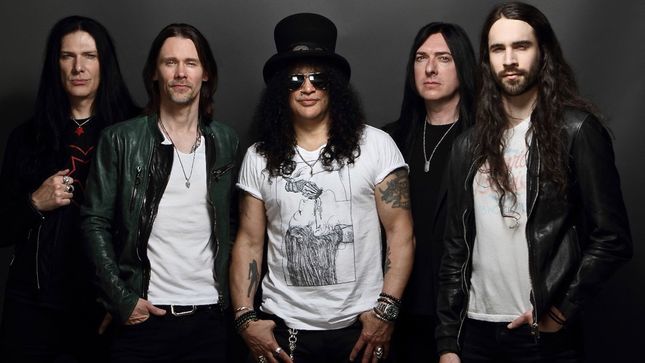 Speaking with Music Feeds, vocalist Myles Kennedy discussed his solo album, Year Of The Tiger, the new Slash Featuring Myles Kennedy And The Conspirators album, Living The Dream, and his "bromance" with Slash. Following is an excerpt from the interview.

Q: How are you still pulling out all these great creative ideas after all this time?

Kennedy: "Oh man, it’s a good question, and I think for me the fear is always that the well will eventually dry up. It always kinda surprises me when another record’s done that there’s still something to be said there (laughs), you know? So I’m always really grateful for that because I will say that I have gone through dry spells as a writer, and that’s a scary thing. When you feel the creative juices aren’t rolling and you keep hitting a wall, you start to wonder if you’ve tapped into everything, is there nothing left to be said or sung about? I just feel very grateful at the end of each record, you know, there was something left to be, whether it was a story to be told or an emotion to convey, there was always something."

Q: What does it takes in this cutthroat industry, to have camaraderie and respect for another musician?

Kennedy: "That’s a good question. I think for me, early on, becoming aware he (Slash) in a lot of ways is a kindred spirit and he lives to play. So when you meet people who are hardwired in the same way that you are there’s a natural pull that happens there. A lot of times in this industry it’s interesting to find people who are in it, but sometimes you wonder what their motivations is – Slash is somebody I know who’s in it for the music. I don’t know if I know too many people who wanna play as much as he does (laughs).

It’s funny, he actually made a comment one day, we were talking about BB King who had recently passed. He made a comment about how BB had been on the road, ultimately, until his last days, he was in a tour bus. Slash made a comment saying, ‘That’s gonna be me someday,’ and I said, ‘Yeah I can see that, you’ll be out there well into your twilight years!’ He just needs to do it, and I kinda feel the same way. I can’t imagine ever retiring because music is oxygen to me."

Slash Featuring Myles Kennedy And The Conspirators have released their new album, Living The Dream, via Slash's own label Snakepit Records, in partnership with Roadrunner Records. A static video for the song "The Great Pretender" can be found below.

The cover art  for Living The Dream was created by renowned visual artist Ron English.

On September 12th, Slash featuring Myles Kennedy And The Conspirators performed on ABC's Jimmy Kimmel Live! The band performed five songs on the show's outdoor stage in front of a standing-room-only crowd. Watch them perform "Driving Rain" and "Mind Your Manners" below: