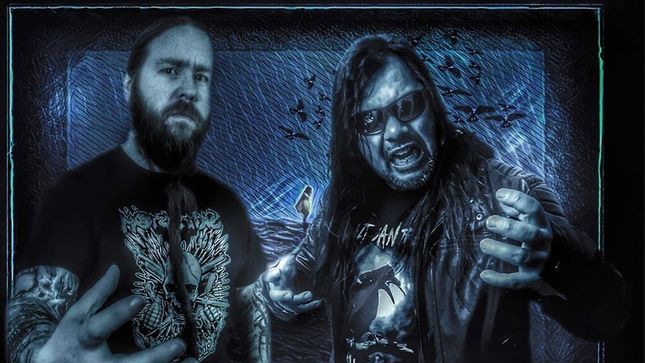 Transcending Obscurity has set December 7th as the release date for Nattravnen's new album, Kult Of The Raven. Listen to new track "Upon The Sound Of Her Wings" below.

Original Death and Massacre vocalist Kam Lee gives one of his best performances here. Nattravnen is about the legend of Night Raven, for which Kam has written an actual story, in addition to complete lyrics of the album. Jonny Petterson of Heads For The Dead, Wombbath has created sublime music that is death metal laced with black metal and atmospheric doom elements, while being devastatingly heavy in his trademark style. Together the duo has concocted not only one of the most interesting death metal albums of this era, but also one with rare lasting value and superior musicianship.

This is essentially dark death metal with better expression and scope. Juanjo Castellano of Revel In Flesh and Carnation fame is responsible for the magnificent album artwork and even the label owner Kunal Choksi chipped in with the band logo. All in all, this is one of the most important releases to come out which sets new standards for the style altogether.

"The Night Of The Raven"
"Suicidium, The Seductress Of Death"
"Corvus Corax Crown"
"Upon The Sound Of Her Wings"
"Return To Nevermore"
"From The Haunted Sea"
"The Anger Of Despair When Coping With Your Death"
"Kingdom Of The Nattravnen"
"Kult Av Ravnen"

"Upon The Sound Of Her Wings":

"Suicidium, The Seductress Of Death":