NICKO MCBRAIN Reflects On BLAZE BAYLEY's Time Fronting IRON MAIDEN - "There Were Nights When He Sang His Cotton Socks Off, And It Was Brilliant... And There Were A Lot Of Other Nights Where It Wasn't So Hot"; Video 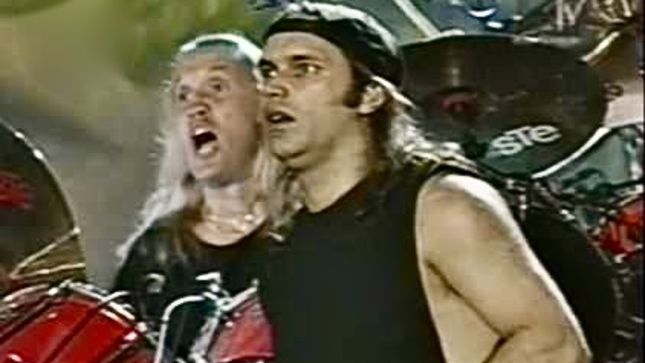 In this new video interview for TVMaldita, Aquiles Priester and Gilson Napolini talk to drummer Nicko McBrain about about a number of topics, including his history with Iron Maiden.

During the lengthy chat, Nicko is asked to discuss Iron Maiden's Blaze Bayley period, if Blaze was the best choice to replace Bruce Dickinson, and if they even considered Michael Kiske (Helloween), who was also working with Maiden manager Rod Smallwood at the time.

Says Nicko: Well, at the time, he was the frontrunner... listen, don't get me wrong man, we listened to thousands of people. We had people sending in CDs and tapes and pictures and resumes and stuff. Now, as far as Michael Kiske... we really wanted to have more of an English singer. Geoff Tate was bounded about, and it was like, 'well, he's an American, this is an English rock band'. So there was a little bit of bias in that respect. We did two tours together. The thing here with Blaze is, there were nights when he sang his cotton socks off, and it was brilliant, and there were a lot of other nights where it wasn't so hot. But those two records, those tracks that we had on those, The X Factor and Virtual XI. And then, of course, we had that amazing promotion scheme around the football teams and stuff... he was in his glory! So, you know, yeah we did two great albums. Love him or hate him... you know what we were saying about the history Maiden? That was part and parcel and I don't think about it any other way."