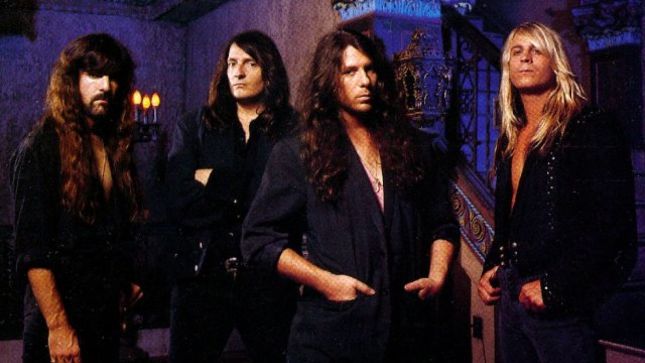 The latest episode of the 80’s Glam Metalcast features original Savatage drummer, Steve “Doc” Wacholz (left in the photo). He does through his history with the band and discusses his current band, Reverence.

On jamming with the Oliva brothers in the early days

Steve: "The first time I met with them and played with them was 1977. I was a kid. In all fairness, Criss was already a guitar god back then at age 14. It was a lot of fun and a learning experience for sure. I had to hone my craft to keep up with those guys. Both Oliva's are very talented, so I had to practice some more to keep up. By 1979 it was a full time gig for us. There was brotherly love and brotherly fights between them. Creatively, you couldn't put two better people in the room together."

On the Edge Of Thorns era

Steve: "Here I am, a longtime member a 1/4 owner of the band Savatage.... I show up to practice one day and I'm introduced to our new singer, Zak Stevens. It was a surprise. Zak is great individual and singer but it just wasn't feeling the same to me. Jon was the voice of Savatage. Zak was a little more poppy if you will. At that time, I had a business going and it was doing very well. I did the album Edge Of Thorns but I decided not to do the tour. Yeah, I was Dr. Killpad on that album.... I played an electric kit!"

Steve: "I probably would still be making music with those guys if Criss was still here. We were pretty tight, it just sucks that he's been gone now for 27 years. At Criss' funeral, we said it was over, that the band couldn't continue without Criss. He was the center point of the band and a guitar god in my eyes. Then 8-10 months later I hear Savatage is recording and I'm like 'Huh?' I didn't play on it, but my picture is on the inside cover and I did the video. I think they did it because I had been there since the beginning. I gave some credibility to the name at the time I guess. I don't really know."

On the idea of ever playing in Savatage again

Steve: "I would do the whole damn album! I just texted Jon today because I read something that said he was writing. He knows I want to play again. It was Paul's idea like 10-15 years ago to bring all the past member together for a show, bringing them out as you progress in the catalog and timeline of the band. I could take a month out of my life and tour Europe. I don't think I would want to do the States. I'd love to do it. It's not like we are getting any younger."

On his favorite Savatage album

Steve: "It's the one I haven't played on yet! You know the early stuff was a lot of fun. I didn't really know what I was doing, I was just playing."