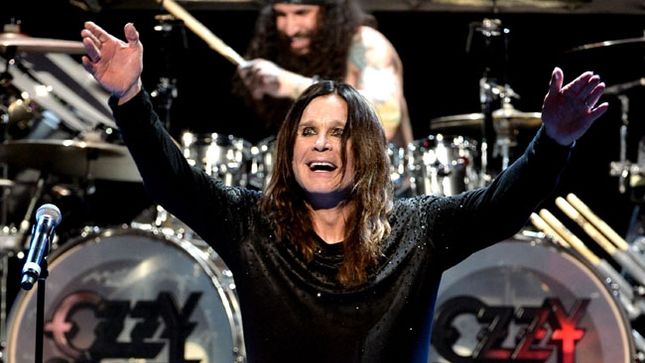 In a new interview with Consequence Of Sound, Black Sabbath frontman Ozzy Osbourne discusses his new collection, Memoirs Of A Madman, and his ongoing solo career.

Asked what he thought made it possible for him to return with another greatest hits album, Ozzy states: "I’m going to be doing another Black Sabbath album and another tour, and I thought, 'Well, people are going to think I’m not doing my solo stuff anymore'. So, Memoirs Of A Madman is to let people know I’m not retired from my solo career. I am going to continue after Black Sabbath, because this next Black Sabbath thing is the final thing. We’re not doing it anymore. After that, I’m gonna continue my solo career, so all of this is really a collection of songs that I recorded over the years and videos of things I’ve done to let everybody know that I’ve not retired from my solo stuff, and I’ll be continuing after the Sabbath thing is finished."

On whether he's often asked about retiring, Osbourne says, "Oh God, all the time. When I did my last tour, I did a thing called “meet and greet” where I meet people and say hi to them. You’d be surprised how many people ask if I’m ever doing another solo record! Why would you even ask that? I’ve never said I wasn’t. Black Sabbath is a different thing. When I do my stuff, I’m jumping around like a jackrabbit. Sabbath is not my band. I’m a member of a band called Black Sabbath."

In regards to his next solo album, "I’ve written three songs. One is called “Crack Cocaine”, one is called “Mr. Armageddon”, and I can’t remember the other title. See, as I’m doing this Black Sabbath thing, I’m not just sitting on my butt watching the days go by. I’m 66 in a couple of weeks, so I ain’t got that many living years, that’s for sure. [Laughs] The essence of what I’m saying is, I don’t want to finish the Black Sabbath tour and go, 'Ah, what do I do now?' So as I’m getting downtime, I am doing some writing when I can."

Read the full interview at this location.

Memoirs Of A Madman (CD) serves as a career spanning audio release, featuring 17 of Ozzy’s greatest hit singles compiled in one place for the first time in his career and is available in a single CD, two-LP set and two-LP picture disc set configurations.

The Memoirs Of A Madman (DVD) is a definitive visual two-disc DVD set which includes classic music videos, along with unreleased and out-of-print live performances, plus interviews from his solo career. Both sets offer fans of the multi-platinum recording artist, Rock & Roll Hall of Fame inductee and three-time Grammy winning singer and songwriter hours of entertainment from Ozzy’s distinguished solo career.

Details on the Memoirs Of A Madman 2 DVD are as follows:

DVD One features more than two dozen of Ozzy’s classic and unforgettable music videos from across his discography, including a bonus alternate version of “Mama, I’m Coming Home” and making-of footage from the videos “Let Me Hear You Scream” and “Life Won’t Wait”.

DVD Two features live performances and interview clips spanning Ozzy’s solo journey, much of which makes its debut on DVD. Some selections have appeared on long out-of-print VHS releases; others will be seen here for the first time, making this an essential package for fans old and new. Ozzy’s union of music and visuals could not be more perfect, and the Memoirs Of A Madman DVD showcases that to brilliant effect.

The Memoirs Of A Madman DVD tracklisting is as follows:

The Making of "Let Me Hear You Scream"

The Making of "Life Won’t Wait"

"Bark At The Moon"
"Never Know Why"

"Killer Of Giants"
"Thank God For The Bomb"
"Secret Loser"

"I Don’t Want To Change The World"
"Road To Nowhere"

"Let Me Hear You Scream"