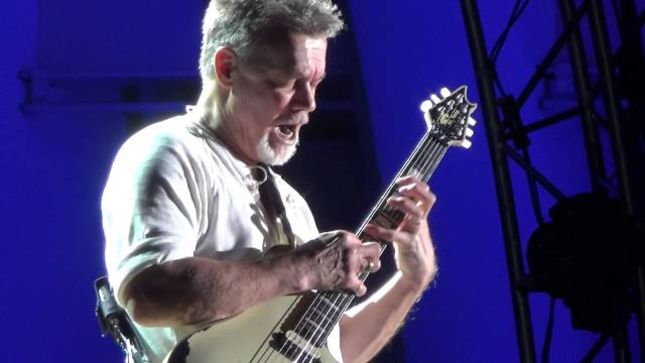 There is a long held piece of KISS lore claiming that Eddie Van Halen wanted to or almost joined the band around the time of the Creatures Of The Night album (1982). During the recent KISS Kruise, the subject was raised again, to which frontman Paul Stanley responded that "Eddie was never going to join KISS and was never almost in KISS."

Stanley: "Eddie came down to the studio - I think there was some strife within Van Halen at that point for him - and Eddie came down just to see what was going on. And I remember he was really blown away by the solo in the song 'Creatures'. He said, 'Get that guy.' That guy who played the solo in 'Creatures' was a guy named Steve Farris, who was in a band called Mister Mister, who had a bunch of hits. At that point, Eddie was getting into keyboards, and I remember he brought some tapes of some of the songs he was working on. And it was, like, this guy is this unbelievable guitar player. I thought, 'Eddie, what are you doing on keyboards?' but that was the start of 'Jump' and all that other stuff that came afterwards."

KISS recently stopped in at the Build Series studios for a 30 minute Q&A session with Madison Vain about their upcoming End Of The Road tour. During the conversation, frontman Paul Stanley addressed the possibility of previous members joining or appearing on the tour, with many long time fans wanting to see original members Ace Frehley and Peter Criss back on the KISS stage.

Stanley: "This is a celebration of everything KISS. This is a celebration of the history of the band, not any individual lineup, but at the same time it would be crazy for us to be so short-sighted to not want to involve other members in the band. Hopefully, there will be appearances by other people who've been in this band. If they weren't there, it's not because we don't want them there. This really is an all-inclusive celebration."

On Halloween, former KISS guitarists Ace Frehley and Bruce Kulick were back on stage with the band aboard KISS Kruise VIII, which sails through November 5th. Official video of the six-piece ensemble performing "Rock And Roll All Nite" can be seen below:

Fan-filmed footage of the expanded lineup's acoustic set including "2000 Man", Ace's "New York Groove", "Nothing' To Lose" and "Rock And Roll All Nite" previously surfaced and is still available: