Producer MAX NORMAN Looks Back On Working With RANDY RHOADS - "His Wonderful Combination Of Technique, Feel, Fire And Musicality All Still Draw You In Some 40 Years Later" 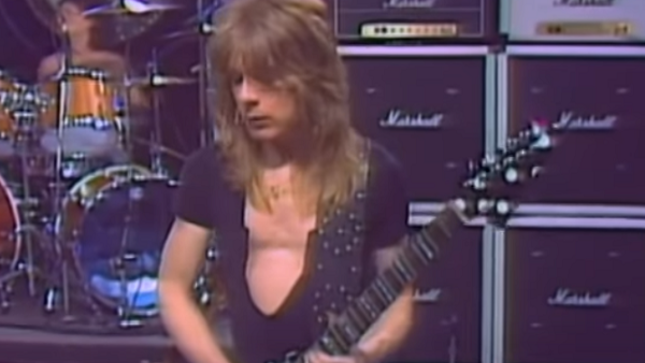 Speaking with Nick Bowcott for Guitar World, iconic producer Max Norman looked back on his work with Ozzy Osbourne - producing his first three albums - and capturing Randy Rhoads' inspirational playing. Following is an excerpt from the interview.

Guitar World: One of the things that truly stands out about Randy’s lead work on both studio albums is the passion and fire that each and every guitar solo exudes. How was that often-elusive ‘magic’ so successfully captured?

Norman: "There was a definite sense of occasion when it came time for Randy to record those main, middle-of-the-song solos. The way we did them was this: While Randy was rehearsing to record a particular solo, we didn’t sit around and listen to him; instead, we’d go up to the local pub for a few beers or whatever. Then I’d go back, and he’d say, 'OK, I’m ready to take it!' You could see it in his face on the studio floor; he was steeling himself... getting ready to pounce. There was a palpable 'Now we’re recording' sense of excitement and momentum building up.

Randy wanted to capture a performance, and he’d attempt to get the solo within the first two or three takes in its entirety. If he didn’t, he’d say, 'Go away for another hour and then come back – I’m not quite getting it right now.' But, for the most part, he would successfully record the whole solo to his liking in those first two or three takes. Randy was such a well-prepared and disciplined guy, he obviously wouldn’t say he was ready until he felt he really was. As a result, we’d grab each solo very quickly and it would be a very fresh, whole take.

Randy had a very clear vision of what he wanted to achieve. To this end, he’d often play what most people would consider to be a perfect take and say, 'No, that doesn’t feel quite right – let’s redo it.' Randy’s incredible attention to detail, plus his wonderful combination of technique, feel, fire and musicality all still leap out and draw you in, even now, some 40 years later – that’s what makes him so unique. It’s astonishing to me that it’s been over 41 years since we did those records."