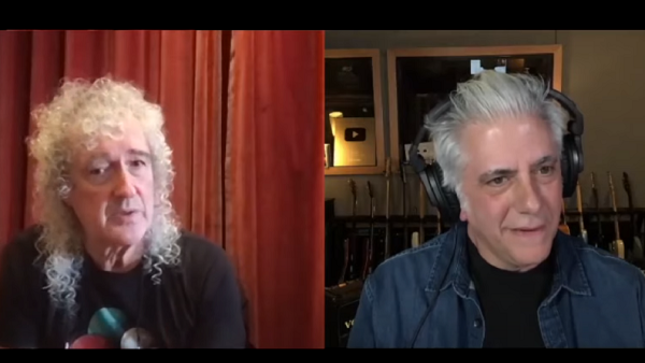 In his ongoing YouTube series What Makes This Song Great?, producer / songwriter Rick Beato breaks down the Queen classic "Bohemian Rhapsody" with the help of guitarist Brian May. Check out the clip below.

May: "There's a kind of rehearse-and-record situation in the studio, generally; we went in there with ideas and we'd start playing around. But in the case of John (Deacon / bass) and Freddie (Mercury / vocals) and Roger (Taylor / drums), they would pick things up very quickly, they would sort of throw things at each other, and very quickly they'd be very much in sync. You've probably listened to the backing track on its own and it's immaculate, isn't it? There's no click. Freddie himself was like a metronome, but a metronome with a lot of balls. It had a bite to it the way Freddie hit that piano. So he was incredible to play with, on the occasions where I'm doing the backing track with him, it's astounding.

He was amazing. He's a self-made man. He went in the studio when we first went in and he'd been singing with us live, we'd been rehearsing and writing, and everything, and he was pretty out of control, I have to say. Even he knew it. He'd run around screaming and posing, and whatever, but the vocals would be all over the place. He went in and we laid four tracks down, and Freddie said, 'I'm not having this, this is not good enough. I don't want to sound like that.' And he went in again and again and again, and worked on it, listened to it, kept coming back, and molded himself into that singer. So by the time he's on 'Bohemian Rhapsody,' he's phenomenal."