QUEEN - "We Will Rock You" Clip From Bohemian Rhapsody Film Streaming 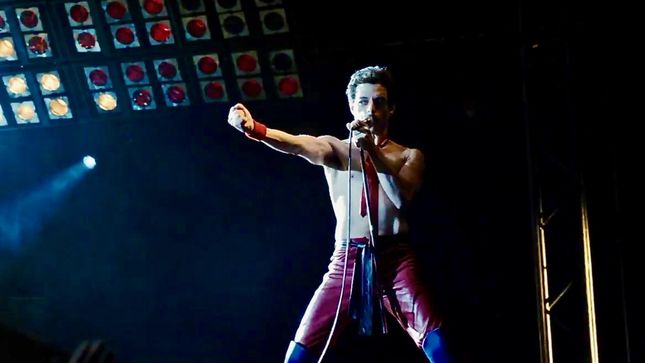 In theatres on November 2nd, Bohemian Rhapsody is a foot-stomping celebration of Queen, their music and their extraordinary lead singer Freddie Mercury. Watch this new clip from the film:

Mr. Robot star Rami Malek is in the lead role as Freddie Mercury, the frontman for Queen. New Regency and GK Films are the production companies. Dexter Fletcher came on board to direct in December after Fox fired Bryan Singer from the project. However, Singer has retained the directing credit.

In the video below, Rami Malek discusses becoming Freddie:

Twentieth Century Fox and Regency Enterprises recently announced that the World Premiere for feature film Bohemian Rhapsody will be held at The SSE Arena, Wembley in London on Tuesday, October 23rd.

Guests and fans will be welcomed to the iconic venue to celebrate the highly anticipated release of Bohemian Rhapsody, walking the red carpet alongside stars of the film Rami Malek, Lucy Boynton, Gwilym Lee, Ben Hardy, Joe Mazzello, Allen Leech, Aidan Gillen, Mike Myers and producers Graham King and Jim Beach. Joining the cast on the red carpet will be Queen legends Brian May and Roger Taylor. Twentieth Century Fox and Regency Enterprises are pleased to announce that the premiere will benefit the Mercury Phoenix Trust, the organisation founded in Freddie’s name which supports HIV/AIDS initiatives globally.

Chris Green, Managing Director Twentieth Century Fox UK, commented, "We’re delighted to be at The SSE Arena, Wembley giving Queen fans the chance to share in what is going to be a fantastic event. The venue is perfect for showcasing the show-stopping performances in the film."

A scene from the film, entitled "Can You Go A Bit Higher?", can be seen below:

For the first time ever audio tracks from Queen's legendary performance at Live Aid are being released as part of the soundtrack album to Bohemian Rhapsody, 20th Century Fox and Regency Enterprises’ forthcoming feature film celebrating the band, their music and their extraordinary lead singer Freddie Mercury. Recorded at the historic Wembley concert in July 1985, these Live Aid songs are among the rare gems and unheard versions from the band’s rich catalogue.

Alongside the show-stopping Live Aid performances of "Bohemian Rhapsody", "Radio Ga Ga", "Hammer To Fall" and "We Are The Champions", the album features other rare live tracks spanning Queen's entire career, new versions of old favourites, and a choice selection of the band's finest studio recordings. Among them are some of Queen's biggest hits, including eleven all-time anthems that reached Number One around the world.

Queen's cinematic music has proved irresistible to filmmakers over the years, featuring in numerous big screen epics. Their 1986 album A Kind of Magic was based on six songs composed for the swashbuckling time-travel adventure Highlander including such band classics as "A Kind Of Magic" and "Who Wants To Live Forever". But Bohemian Rhapsody will be only the band's second ever full original soundtrack album release, following on from the classic Flash Gordon in 1980.

The 22 songs on the soundtrack were produced by Brian May and Roger Taylor, with engineering and co-production by long-time Queen studio collaborators Justin Shirley-Smith, Kris Fredriksson and Joshua J Macrae, and mastering by Adam Ayan and Bob Ludwig.

The key task for the team behind the Bohemian Rhapsody soundtrack was sourcing the most suitable versions of the band’s songs, especially live performances, to fit the screenplay's career-spanning narrative. Their brief was not merely to produce a greatest hits playlist package but a soundtrack album to stand on its own merits, underscoring key moments in the screenplay. May, Taylor, and their co-producers worked with the filmmakers to find the best versions of each track to heighten the dramatic power of each scene.

Ensuring that listeners are in no doubt they are listening to a soundtrack album, Brian came up with the inspired idea that Queen should record their own arrangement of the famous 20th Century Fox Fanfare. Featuring May's famous multi-layered guitars and Roger Taylor’s distinctive percussion, this revamped track provides a suitably flamboyant opening fanfare to both film and album.

Unlike Queen's soundtrack to Flash Gordon, no spoken dialogue from Bohemian Rhapsody is included on this new album. And while the film uses only parts from songs and performances, the soundtrack features the full-length versions of some of the band's best-loved studio and live recordings.

The five tracks from Queen's 21-minute performance at Live Aid on July 13th, 1985 have never been released in audio form before. They only ever featured on video as a special extra on the DVD/BluRay release of Queen Rock Montreal, which features the Montreal Forum shows of November 1981. The Live Aid audio is exclusive to this new soundtrack album.

Other tracks on the soundtrack have been sourced from different decades and even different continents. "Fat Bottomed Girls" comes from the Paris shows in 1979, part of the Jazz world tour and has never been released before. "Now I'm Here" was recorded at the band's 1975 Christmas Eve show at London's Hammersmith Odeon. And the history-making duet between Freddie and Brian on "Love of My Life" comes from the Rock in Rio festival of January 1985 when 300,000 Brazilians sang along. Previously this track was only available to fans on the video releases of this performance.

For the studio recordings on the album, Queen had the luxury of being able to work with the Bob Ludwig remastered tracks from 2011, widely considered the best and most definitive versions.

The three remaining tracks on the soundtrack will be fresh to Queen fans, old and new. "We Will Rock You" starts out as the studio version, then seamlessly blends into a live performance with audience participation. This has been created especially for the film. "Don't Stop Me Now" features Brian's newly recorded guitar parts and is much closer to how the band plays the track live today.

"Doing All Right" was originally recorded by Smile, the predecessor band to Queen that featured Brian and Roger with vocalist Tim Staffell. When Tim later left, Roger and Brian would join forces with Freddie to form Queen. Freddie’s interpretation of the song featured on the first Queen album. To recreate the original Smile version, Brian and Roger reunited with Staffell at Abbey Road Studios to re-record "Doing All Right" for the Bohemian Rhapsody soundtrack. This session which featured Roger, Tim and Brian all singing lead vocals took place almost 50 years after the original Smile recording.

With record sales estimated at 300 million and counting, Queen remains evergreen rock favourites whose glorious catalogue of songs continues to thrill fans of all ages across the globe. Despite the loss of Freddie in 1991, their following has continued to grow over the decades, boosted by a new wave of fans who first discovered the band's music through their hugely successful stage show We Will Rock You or via hit TV shows like Glee, American Idol and The X-Factor.

The Bohemian Rhapsody film and its original soundtrack album are certain to introduce Queen to a new generation of listeners and remind existing fans just how magnificent the band was in its prime. Queen remain spectacular performers today, both live and in the studio, their songs having comfortably stood the test of time. After almost 50 years together, Queen continues to be one of the most exciting and beloved bands in rock history.

About Bohemian Rhapsody The Film: Bohemian Rhapsody is a foot-stomping celebration of Queen, their music and their extraordinary lead singer Freddie Mercury. Freddie defied stereotypes and shattered convention to become one of the most beloved entertainers on the planet. The film traces the meteoric rise of the band through their iconic songs and revolutionary sound.