QUIET RIOT Guitarist ALEX GROSSI Guests On Talking Metal Podcast, Confirms New Music Featuring Drummer FRANKIE BANALI Is On The Way - "There Are A Lot Of Tracks In The Vault" (Video) 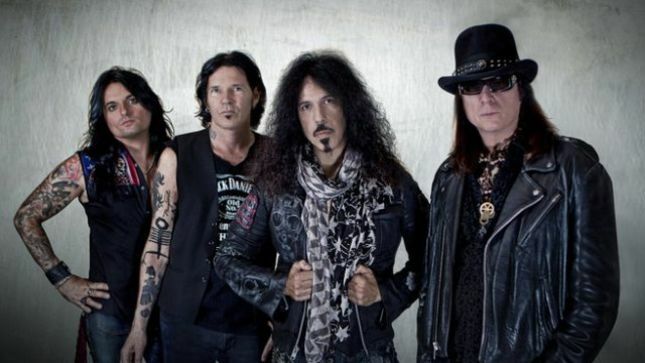 Quiet Riot released their debut album, Metal Health, in 1983. The band made history as the first American heavy metal debut album ever to reach No. 1 on the Billboard charts in the United States. Quiet Riot's Metal Health ultimately sold over six million copies in the U.S. and had been credited with leading the way for other heavy metal bands worldwide to find their success.

After guitarist Randy Rhoads and bassist Rudy Sarzo left the original Quiet Riot lineup to join Ozzy Osbourne, Kevin DuBrow picked up the pieces and started his own band under the name DuBrow. And from 1980 – 1982, he played tirelessly inSouthern California clubs with multiple musicians until he found the lineup — Kevin DuBrow, Frankie Banali, Rudy Sarzo, and Carlos Cavazo.

From the very beginning, Missy Whitney worked alongside DuBrow in promoting his band to secure a record deal. DuBrow played a total of 107 gigs (Whitney reports) where she was in attendance, growing the band's support and fan base.

In September 1982, producer Spencer Proffer signed the band to a U.S. recording contract with CBS Records and recorded Metal Health. And with the release of Metal Health, Whitney continued to work with the band in an official fan club capacity by running the Quiet Riot Squad. She was instrumental in connecting fans to the band, pre-social media, and developing fan newsletters, merchandise and fan street teams across the U.S.

Writing about her time working with DuBrow and Quiet Riot, Whitney completed her memoir entitled, Keep On Rollin' – My Fan Club Years With Kevin DuBrow And Quiet Riot, in 2020. In it, she shares her unique experiences working alongside Kevin DuBrow and Frankie Banali. Included in her book, she discusses DuBrow's untimely death in 2007 and pays tribute to Frankie Banali, who recently died of pancreatic cancer in August of 2020.

The book is a collection of personal photos and handwritten letters from Kevin DuBrow. Plus, contributing photographs (and book cover) from iconic photographer Mark Weiss and early Quiet Riot photographer Ron Sobol. Missy Whitney and Mark Weiss partnered in 2020 for the book's release and are currently raising funds through book pre-orders with special incentive packages through Indiegogo to produce the book.The foreword is being written by Quiet Riot’s bassist, Rudy Sarzo, and a portion of book proceeds will be donated to the Pancreatic Cancer Cure Foundation.

Pre-order your copy of Keep On Rollin' – My Fan Club Years With Kevin DuBrow & Quiet Riot now at this location.

“I want to say kudos to you guys (Mark Weiss and Ron Sobol) for what you are doing with Missy’s book because very little is known about the DuBrow period. In 1979 when Randy Rhoads left for Ozzy Osbourne — the period of Missy’s book ties the previous Quiet Riot, Metal Health, the world knows today. This book celebrates Kevin DuBrow, Frankie Banali, and Randy Rhoads. And it should be in the collection of — not only Quiet Riot and Ozzy Osbourne fans but in the collection of every music fan. I am honored to do the foreword because I was there and Missy was the OG fan club president.” — Rudy Sarzo, Quiet Riot

“Missy was looking for a photo for the cover of her book, and my photo was really special to her because she gave Kevin that necklace. He wore it on one of my photo shoots, he wore it all the time, but it was really prominent in this one photo — which is going to be the cover. Her manuscript was just so genuine and pure — I thought — I gotta get involved with this. I think that people are going to see Kevin in a different way — that I think needs to be shown.” — Mark “Weissguy” Weiss

“Kevin did speak his mind but — Kevin was a great fuckin’ singer. I remember doing shows with DuBrow in the early days in ’81 and ’82. We always had a good rapport. Quiet Riot was instrumental in instigating the L.A. scene — with doing the US Festival and being the first #1 metal record. Kudos to Quiet Riot, they set a place in history” — Stephen Pearcy, Ratt