QUIET RIOT Guitarist ALEX GROSSI - "When FRANKIE BANALI Got Sick, One Of The First Phone Calls He Made To Me Was Regarding Getting A Substitute Drummer" 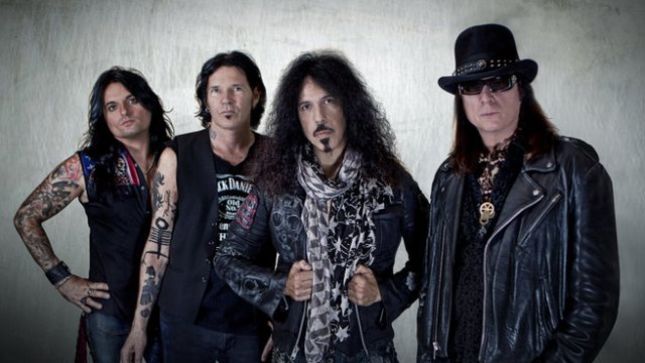 Quiet Riot guitarist Alex Grossi recently guested on the Music Mania Podcast and discussed the band moving forward following the death of drummer Frankie Banali, who passed away in August following a long battle with cancer. Former Type O Negative drummer Johnny Kelly has taken his place behind the kit for the forseeable future.

Grossi: "When Frankie got sick, one of the first phone calls he made to me was regarding getting a substitute drummer, and Johnny and I had worked together, and still work together, in Hookers & Blow, that cover band we do for fun. He just made perfect sense on so many levels. Johnny, he's family to me, and Frankie and him were friends. It worked out great, because the first show that Frankie was gonna miss was in Dallas, Texas, which is where Johnny Kelly lives. So we were able to fly in, do one song for soundcheck, and then trial by fire, do the whole show. He had never played with us before, and Chuck (Wright / bass) and our singer had never even met him. It was definitely a fly-by-the-seat-of-your-pants-type moment, but Johnny rose to the occasion, and we're thankful he's onboard to help us out."

Quiet Riot checked in with the following update back in September:

"It was Frankie Banali's wish that the band continue and we keep the music and the legacy alive. Chuck Wright has been in the band off and on since 1981 and played not only on the song 'Metal Health' but many other Quiet Riot albums. Alex Grossi has been in the band since 2004 touring and recording. Jizzy Pearl has been a member of the Quiet Riot family since 2013, and Johnny Kelly has been doing a great job filling in on drums this past year with Frankie's blessing.

We are happy to have shows on the calendar with many more TBA and very much look forward to celebrating the history and legacy of Quiet Riot with all of you in 2021 and beyond!"