RATT Frontman STEPHEN PEARCY Talks New Line-Up - "It's Like Ratt Circa '83, '84; This Is The Closest Thing To Being That Entity" 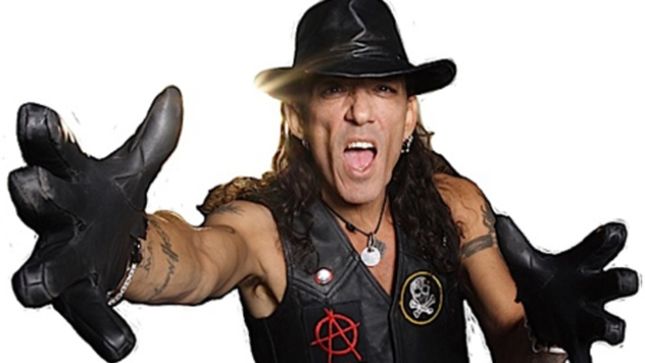 Ratt frontman Stephen Pearcy recently guested on Talking Metal, discussing the current formation of the band featuring himself, original bassist Juan Croucier, guitarists Jordan Ziff (Razer) and Chris Sanders (Britny Fox), and drummer Pete Holmes (Black N' Blue). He did not address the recent shows where he was seemingly intoxicated (see below for details), talking instead about how well the new band works on stage.

Pearcy crashed and burned on stage in St. Charles, IL on Ocober 5th, seemingly intoxicated while performing. On September 26th, Ratt performed in Huntington, NY and it was by all accounts a disastrous show, with Pearcy unable to stand due to an alleged knee injury but coming off as intoxicated (see the fan-filmed video below).

At one point, Croucier addressed the audience, saying "In case you guys didn't notice, Mr. Stephen Pearcy is in a lot of pain. But tonight, we said there's no way, there's no way we're canceling this show because we love you guys. We love each and every one of you, and thank you so much for coming down. We promise we'll be back, without the injury, okay? Thank you so much for your understanding. We're gonna keep going and do our best."

@MetalSludge Way Fucked Up Jr. ! If anyone in this organization had a soul they’d just stop and get the ship in order! pic.twitter.com/FNSJXTF4Ha

@metalsludge Stephen Percy’s “knee” injury really carried over to his performance tonight! Hopefully his “knee” gets some attention ASAP! Thank god I was only at the show for Juan’s sweet moves or I would have been disappointed pic.twitter.com/aqyRxj0E89

Sadly, the October 5th show went down in similar fashion. Watch the clips below, you be the judge.

Went to the @ArcadaTheatre to see RATT. Band was awesome especially Jason on lead guitar as they tried to cover for Stephen Pearcy. Complete Poser - drunk, drugged out, stumbling and can’t remember the words. Kept walking off stage or sitting on drum riser. What a joke!! #rehab pic.twitter.com/JYmjW4fobs