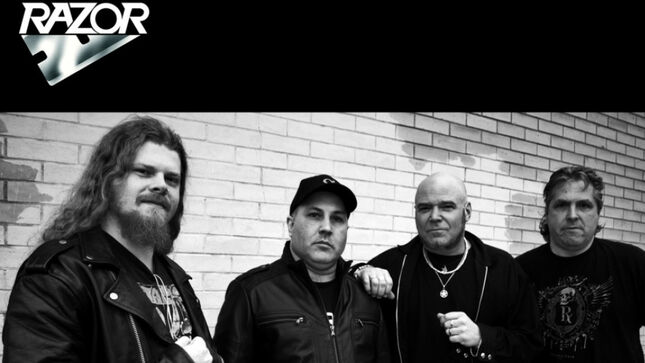 Legendary Canadian thrash metallers Razor recently completed work on the long-awaited follow-up to 1997’s Decibels. Cycle Of Contempt - the band’s ninth studio album - will be released sometime in 2022 via Relapse Records and will feature the following tracks:

May
22 - Rickshaw Theatre - Vancouver, BC (with Sacrifice, Exciter, Witches Hammer)

A message from Dave follows...

"Hello, I am Dave Carlo. I am fundraising for my beautiful wife Rosanna. Rose is a fantastic wife, an even better mother to our two kids. Our son has autism and a number of extremely difficult challenges in his life. My daughter has Borderline Personality Disorder and OCD and she has attempted suicide three times over that last 5 years, thankfully without success. The last attempt was October 2020 where she jumped off a bridge and broke her back. Even though Rose was undergoing chemo at the time, she was at Patricia's bedside at the hospital at all hours during that time. Rose's devotion to her family is heroic.

In June 2020 Rose had a gallbladder attack and was scheduled to have her gallbladder removed. During that surgery they discovered cancer on the exterior of her gallbladder. Normally the prognosis for gallbladder cancer is very poor but because it was found incidentally, it was still at a very early stage. A follow up surgery to remove part of her liver and some regional lymph nodes unfortunately showed some cancer in her lymph nodes. She went through a year of chemo with limited results, and was referred for clinical trials at Princess Margaret Hospital in Toronto Canada. Unfortunately what appeared to be indifference to the need for Rose to get help in a timely manner led to constant delays and four months without any treatment whatsoever. Now the cancer has progressed from stage 2 to early stage 4 , completely because of the lack of action on the part of the people charged with her care.

Realizing that time was being wasted in a manner far more flippant that you would expect under these circumstances, I reached out to the Mayo Clinic in Rochester Minnesota in October of 2021. Sending them all pathology slides, images and test reports (with the help of our fantastic GP doctor), we got a team of caregivers and doctors in place at the Mayo Clinic to provide guidance on what we need to do to help Rose.

Rose will likely have to go to Minnesota for treatment, but the costs are very high. The costs already incurred to cover all the reviews and analysis of reports at the Mayo Clinic has added up and will continue to increase as they get involved to help her moving forward. But their input and guidance is absolutely critical at this point to try and save my wife. My kids really need and depend on this wonderful lady (to speak nothing of what she means to me!!). We have reviewed the upcoming financial demands of her treatments and we are asking via fundraiser to try to raise around 50% of what is required. I honestly am a bit embarrassed to have to do this, but with my wife's life hanging in the balance, I have no choice. I would give my own life to save her if I could.

Rose just turned 61 years old. Her mother is alive and about to turn 88 years old, so if we can get Rose into remission, she has a strong chance of many years ahead of her.

If you are in a position to help and are willing to, we would be beyond grateful. Those of you who know me as a professional musician know I have committed to doing something to give back in any way I can to thank you for your help."

Visit the GoFundMe page here, and see a video message from Dave below: