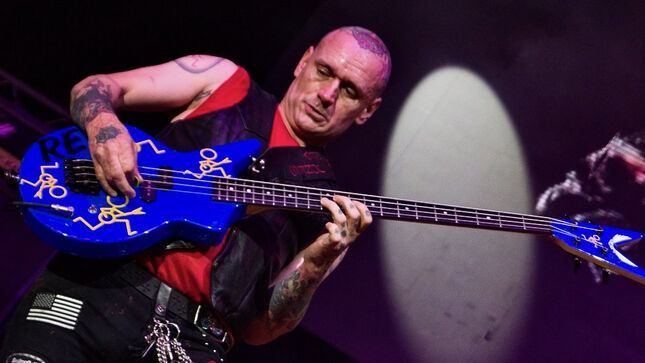 Rev Jones announces his new solo album, In The Key Of Z, to be released worldwide via Dark Star Records on October 1. Physical pre-orders are underway and digital pre-orders begin on September 24. Pre-order here.

“Once again my partner in crime Rev Jones proves he is different from the rest... not only in his writing and bass play, but his off the hook vocals. Crazy great range, but most of all, his insanely different melody lines that push the envelope of what you can get away with in a great song. Playing drums on this is like breathing air for me and fits like a glove... Hopefully a boxing glove.” - Jeff Martin, Drummer

"We are very excited to have a musician like Rev Jones of such a high caliber on the Dark Star Records roster, who has performed and recorded with a ton of platinum selling artists and is just such an amazing bass player and singer." - Jeffrey A. Swanson / President / Dark Star Records

In addition to producing In The Key Of Z - the follow-up to his 2018 solo debut Bakwash - at his home studio in Oklahoma and writing or co-writing all 12 tracks, Jones also played bass, guitar, double bass, keyboards, mandolin, ukulele and tambourine. The songs themselves represent Rev’s distinctive takes on thrash and metal, as well as a few unexpected yet way-cool forays into country and folk.

“Most performers are trying to be too serious or cautious,” says the skull-tatted wildman, who’s recorded and toured with Steelheart, Leslie West & Mountain, Michael Schenker Group, Fuel, Paul Gilbert, George Lynch and his own Rev Jones Band among many others. “But I’ve never allowed myself to be pigeonholed as a performer. My favorite album of all time is still Night at the Opera by Queen. Great music should always sound fearless.”

And whether it’s the smart-ass ferocity of “Lollygaggin’” (based on a favorite line of dialogue from Blazing Saddles) or the monster-riff veracity of the title track, every cut on In The Key Of Z - mixed by Shawn Berman, known for his work with Guns N’ Roses, Danzig and George Thorogood & The Destroyers - rocks with the creative confidence of a 30+ year musician still finding joy in plugging in, turning up and blasting off in any direction he pleases. “It’s all rock as far as I’m concerned,” Rev says. “Even where the songs have a folk or country feel, the guitars are heavy. The bass, mandolin and ukulele feel heavy, too. The goal was for it all to sound to like me.”

For Rev Jones and his fans, the album stands as an in-your-face ode to artistic integrity, musical intensity and a natural instinct for what makes rock both dangerous and fun. “For me, this project is one big realization,” Rev says of In The Key Of Z. “You can write these cool riffs. You can embrace different styles of music. You can invite your friends to be a part of it. And if you stay true to yourself and play what’s good, people will respond.”