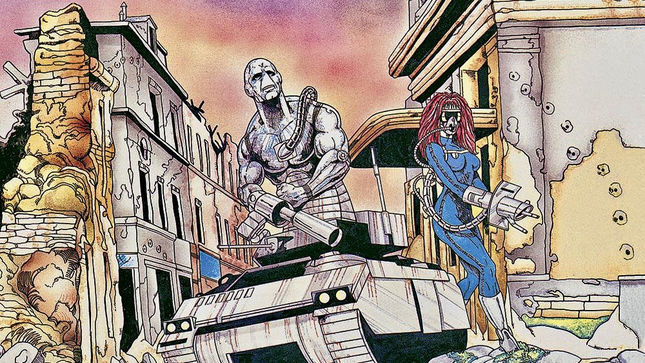 Donnie gave The Metal Voice some updates in regards to Riot and Riot V, he said, “Next year 2018 is the 30th anniversary of Thundersteel and I will let you know first hand that we are playing Loudpark 2018, the Thunderteel album from start to finish and we will bring Tony Moore and Bobby Jarzombek with the whole Riot V band and we will be doing the Thundersteel appearances at other festivals as well."

Donnie stated that Riot V has written 22 songs for their new album and will choose about a dozen for the album, which will include two bonus tracks. He concluded that the new Riot V album will be released around November 2017 on their new label, Rat Pack Records.

Fight Or Fall is a multi-part reality/documentary, it tells the complex tale of the Riot back story and follows Riot V as they tour the US, Canada and Japan. Part 1 will be streaming for free on Wednesday, June 7th (Mark Reale's Birthday) on The Metal Voice YouTube channel and Facebook page. Check out two trailers below.

Part 1 covers the formation of Riot, Rock City, Narita-eras and the demise and resurrection of the band for their most popular album, Fire Down Under. The first instalment also covers Riot V in rehearsals and preparation for their US dates and their trek into Chicago and Detroit.

Filmmaker Jimmy Kay had this to say about the project, "This is a reality/documentary, the viewer gets to watch the band travel in the first person from city to city, see them perform their music, tell their stories and interact with themselves and the fans. It captures the brotherhood, the continuation of Riot V and bridges the two entities together. The documentary also aims to explain the Riot back story and legacy."

Riot V's debut, Unleash The Fire, was released in October 2014. The CD marked the first release from Riot without the late, great founding guitarist Mark Reale, who passed away in 2012 due to complications of Crohn's disease. Riot V was encouraged by father of Mark Reale to forge ahead in his honor.