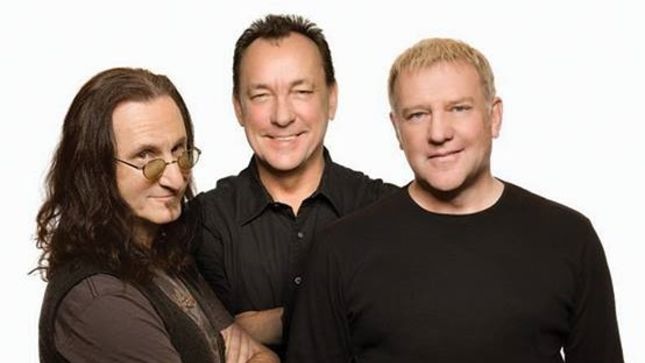 During last week's Rock And Roll Hall Of Fame induction ceremonies in New York, Rush guitarist Alex Lifeson - who suffers from arthritis - was interviewed on the SiriusXM Satellite Radio program Debatable; an excerpt of the audio has been transcribed and reads as follows:

"I would say that it's unlikely that we'll tour again as Rush. Really, we toured for 41 years, and I have to say that first year off, I felt like I was grieving for my career and the band, but truly, 41 years of touring the way we toured, I shouldn't feel badly about that."

Lifeson went on to say that "Geddy (Lee - vocalist / bassist) and I will probably do something together. He's been really busy. He's working on his own little book project. He's become quite a bass guitar collector, and he wants to do a little thing on the history of the instrument. So that's keeping him super busy." As for drummer Neil Peart, Lifeson commented: "I'm not sure what Neil's doing these days. He's on the west coast. He's always got something going on."

When asked about the possibility of a solo album, Lifeson replied, "It's funny. One day, it's, like, 'Yeah, this is exactly what I wanna do.' And then the next day it's, like, 'This sucks. Forget it. I'm not doing this,'. I love those songs, then I hate them, and then I love 'em again. So it's pretty typical, I think. It's a much more focused thing when it's the band. I just need to be more focused and a little more disciplined, I think. But it's something I would like to do."

On April 7th at the Barclay's Center in Brooklyn, NY as part of the Rock And Roll Hall Of Fame induction ceremonies, Rush vocalist / bassist Geddy Lee joined YES for a performance of "Roundabout" featuring former YES vocalist Jon Anderson. In addition, Lee and Rush guitarist Alex Lifeson joined Pearl Jam for a jam of the Neil Young classic "Rockin' In The Free World" along with members of YES and Journey. Check out the video clips below.