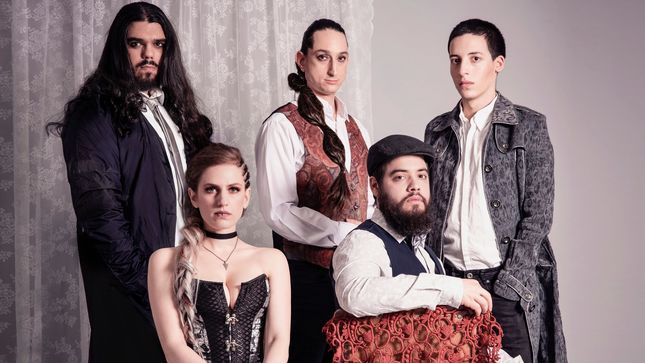 Strangers – the new concept album by the progressive/symphonic metal band Scardust, which will be released by M-Theory Audio on October 30 – sees the acclaimed Israeli group collaborate with an unusual guest on the epic, seven-minute track “Concrete Cages”: German folk musician Patty Gurdy, someone with whom Scardust vocalist Noa Gruman has developed a strong friendship.

A new interview with Gruman and Gurdy – which was recently conducted via video chat from the musicians' respective home countries – can be seen below.

To metal fans who might not be familiar with her work, Gurdy offers this introduction: “Hi there! I am a German musician playing a funny instrument. You might know me from my YouTube channel, where I discuss hurdy-gurdy-related topics. You can see me live with my band Patty Gurdy's Circle. And you might also know my bandmates from their other group Subway To Sally. I've also worked with artists such as Faun, Alestorm, Ayreon and ASP, as well as the Amazon Prime Series 'Carnival Row.'”

The relationship between Gurdy – whose YouTube videos have accumulated more than 30 million views – and Scardust began two years ago after mutual admiration led to a guest appearance at a Berlin concert by the band. Friendship blossomed into a joint UK tour in 2019 and now culminates in the Strangers track “Concrete Cages.” Inspired by Patty’s unique playing, singing and character, the band tailored the song especially for her. They planned to record, perform a show and shoot a video together in Tel Aviv, but unfortunately, just days before Gurdy was due to travel, all flights between Germany and Israel were banned, forcing them to change their plans and adapt to the new reality. Eventually, Gurdy recorded in her home studio in Germany with support by Gruman via video chat from Israel, in tune with the times.

A 60-second sample of “Concrete Cages” – which also features background vocals by Gruman’s Hellscore Choir, who have also appeared on recordings by Amorphis, Ayreon and Orphaned Land – can be seen below:

Mastered by Jens Bogren (Opeth, Devin Townsend, Arch Enemy), “Strangers” – the follow-up to Scardust's acclaimed full-length debut Sands Of Time, is an intriguing concept album about estrangement that is built of complementary song pairs working from the outside in. The group recently unveiled videos for the first such pair, “Tantibus II” and “Addicted”.