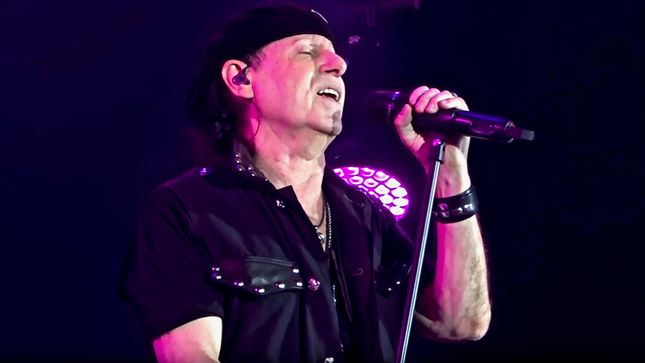 “Last time we promised you three brand new songs that will be released on our new album Born To Touch Your Feelings,” says rock legends Scorpions. “This week you will find out what that means: Our new rock ballad "Follow Your Heart" is out today and available to download & stream here from now on.”

Scorpions recently launched the pre-order for their new album, Born To Touch Your Feelings - Best Of Rock Ballads.

Says the band: “We have put our most beautiful and legendary ballads on a brand new album and are topping it off with three brand new songs: “Follow Your Heart”, “Always Be With You” and "Melrose Avenue". The album also includes a new acoustic recording of "Send Me An Angel".

Additionally we’re going back to our roots with a brilliant cover photo by the legendary photographer Ellen von Unwerth. After the super realistic art of Gottfried Helnwein (Blackout) or Helmut Newton’s legendary photo on the cover of Love At First Sting, this outstanding photo by Ellen will be worth its weight in gold.

The album will be out on November 24th as CD, 2LP-Heavyweight-Gatefold-Vinyl, download and stream! You can pre-order it here.”

It’s a fall day in 2017 in New York City. The Scorpions kick off their US tour at Madison Square Garden, the most legendary of all legendary rock arenas. With more than twenty thousand fans in attendance, the show has been sold out for weeks. Some paid up to $600 for their ticket. After about an hour of hard rock tunes something strange transpires. Klaus Meine, the Scorpions’ lead singer, announces a ballad that’s usually not on the band’s US setlist: "Wind Of Change". Twenty thousand people start to sing along. A cappella, by heart, empathetically.

"Nowadays, ballads are the pinnacle of rock music,” says Meine. "If they’re well-written, they will go straight to the hearts of the fans."

Ballads are the diamonds in between the amplitude of songs, the fundamental particle of rock music. Ballads float, weightlessly and effortlessly, and land right in the emotional part of the brain - the hypothalamus. The Scorpions, however, are internationally known as the grandmasters of ballads.

"Growing up, we didn’t really listen to Mozart or Haydn but rather to Elvis, The Rolling Stones or Little Richard,” says the founder of the Scorpions, Rudolf Schenker. “But still, the more serious kind of music is what we were influenced by starting at a very young age. There’s no denying that."

Kirk Hammett of Metallica once said, "The difference between the Scorpions and us is best noticed in ballads. We have the blues in our blood - for them it’s classical music.”

The Scorpions have now put their most beautiful and most legendary ballads on a sampler and have topped it off with three recent ballad-like songs. Its title: "Born To Touch Your Feelings”. Which, as it happens, is the credo of Klaus Meine, Rudolf Schenker, Matthias Jabs, Pawel Maciwoda, and Mikkey Dee as well as a song from the band’s beginnings.

As Klaus Meine puts it, "The meaning of a ballad always goes deep. It’s not surprising that a song like ‘Wind of Change’ is received euphorically in the US these days. The fans don’t connect the song to the fall of the Berlin Wall and the iron curtain but rather to their current situation, the desire for change, and the hope for a world without nuclear threats and civil wars as well as the longing for peace.”

As they were compiling the songs for their latest album, the Scorpions were reminded of the timelessness of their ballads. It is not for nothing that they named the compilation after a song from 1977, "Born To Touch Your Feelings”.

"Throughout the decades,” says Matthias Jabs, "our fans have been associating us with great ballads like ‘Send Me An Angel,’ ‘Still Loving You,’ and ‘Holiday.’ And that’s very honorable."

The 1984 super hit "Still Loving You" was the reason why people in ballad-obsessed France were naming their babies Sly, the acronym for the song. Alongside the greatest Scorpions ballads other secret treasures are unfolding on the album such as "Gypsy Life,” "Eye Of The Storm,” and "When The Smoke Is Going Down.’’ The Scorpions redefine their musical foundation by these three wonderfully composed new ballads.

"After my solo performance of ‘Follow Your Heart’ at our MTV Unplugged Concert in Athens," says Meine, "I was hoping to record a band version of the song which gives hope in difficult times and carries a message to the young generation to realize their dreams and to take charge of the future. Believe in yourself and follow only your heart."

"Always Be With You" is the brand new song by Rudolf Schenker. A deeply emotional declaration of love, as well as a story of change, it’s no coincidence that the exceptional guitarist and composer wrote this song after the birth of his youngest son.

"Melrose Avenue,” on the other hand, carries the name of arguably the most famous strip in Los Angeles and is the most recent song of Matthias Jabs. Its music perfectly captures the enchanting sense of life in California. Close your eyes, listen and start to dream: An invitation to an exciting trip to the West Coast of the United States.

It was 50 years ago that the first formation of the Scorpions was traveling in a rickety red VW bus to unload their equipment and play their rock music in pubs, garages, and backyards in the villages of Lower Saxony, Germany. From the very beginning the band had two almost apocalyptic goals. "First, we are going to limit ourselves to English lyrics, because, second, we are going to be one of the best rock bands on earth." What came next is music history. From winning the Lifetime Achievement Award (2009) as well as the Award for Best National Band (1992) at the most renowned German music awards Echo, to winning the World Music Award (1994) and the Rock Walk of Fame, there aren’t many noteworthy awards the Scorpions haven’t won. Even the cataloging of their Gold and Platinum awards go against every reasonable summation; there are just too many. And there’s more every year. It’s only known that record sales are somewhere beyond 100 million.

Looking back at it, it’s intriguing how seemingly random everything fell into place. How an imaginative construct of rhythms, lyrics, melodies, and the band’s charisma turned into a collective hit - consistent in style and one of a kind.

One more thing accompanied the success story of the Scorpions: Outstanding artwork. Be it the super realistic art of Gottfried Helnwein (Blackout) or Helmut Newton’s legendary photo on the cover of Love At First Sting, the cover on the packaging of the musical content was always worth its weight in gold.

For "Born To Touch Your Feelings" the band realized another significant coup: Ellen von Unwerth. The great woman of modern photography was responsible for the creation of its cover. "I am very happy. I didn’t have to persuade Ellen for very long to give us this fantastic picture for the new album,” says Klaus Meine.

The album production, on the other hand, was in the trusted hands of Mikael Nord Andersson and Martin Hansen. 40 years ago the song "Born To Touch Your Feelings" was released for the first time. Now it’s the title song of a truly wonderful album, and the emotionally involved reminiscence of a legendary band. 40 years. Half a lifetime. An entire world-career.

Scorpions have released new, official emojis, now available on iOS and Android. Fans can add over 100 Scorpions “themed” emojis to their text messages and posts including ones of Rudolf Schenker, Klaus Meine, Matthias Jabs, Pawel Mąciwoda-Jastrzębski, and Mikkey Dee and lyrics to rock your friends like a hurricane.