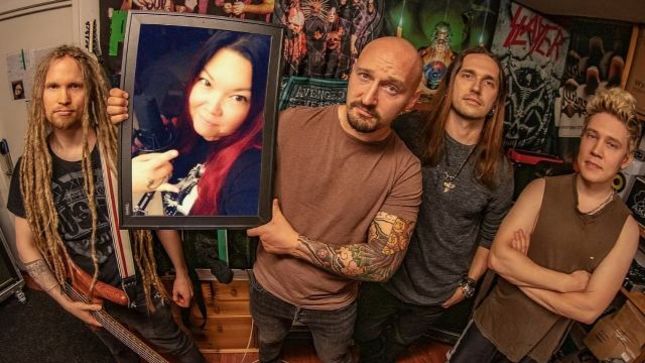 Helsinki-based Oceanhoarse likes to keep busy. After the touring plans for this fall were put on hold due to the pandemic, an idea struck somewhere in between the relentless songwriting and the upcoming studio-sessions: Let's just jam on a couple of Ozzy songs – and film them!

The band was joined by Sinergy vocalist Kimberly Goss - who dropped off the metal radar years ago - for "Perry Mason". Here's what Kimberly had to say about Ozzy, and this collaboration:

"You can't be a lover of metal without Ozzy having had an influence on you at some point in your life. The first vinyl record I ever owned was Paranoid by Black Sabbath. I fondly remember sitting in my room, turning on my black light and listening to Electric Funeral over and over again! I was also a huge fan of Ozzy's solo career, but when Ben (Varon) asked me to partake in this Ozztober project that Oceanhoarse was doing, I was a little hesitant at first.

I dropped off the face of the metal scene about 14 years ago to focus on raising my daughter. I've really enjoyed the anonymity that comes along with being in a suburb while living the mommy life. I never stopped being involved in music, but I just switched gears to something more befitting to my role as a mom. In recent months, however, I've started collaborating on a metal album with a killer guitarist in hopes that now when my kid is older and less dependent on me, I could concentrate on starting a new band and work on the second phase of my career in metal. As scary as it is to put myself back out there after such a long absence, I figured this would be a fun way to reintroduce myself! I've been close friends with Ben for almost 18 years, so it was a great pleasure to finally work with him on something and I hope the fans enjoy it. Be sure to keep an eye out for my new band debuting within the next year or two. We still need a complete line up, so if anyone else is looking to come out of retirement, hit me up!"

Kimberly Goss launched Sinergy in 1997, releasing three albums: Beware the Heavens (1999), To Hell and Back (2000), Suicide By My Side (2002). There were several ine-up changes over the course of the band's existence, but the final line-up featured Goss, Alexi Laiho (guitar / Children Of Bodom), Roope Latvala (Children Of Bodom), Janne Parviainen (drums / Ensiferum) and Lauri Porra (bass / Stratovarius).

A fourth Sinergy album, Sins of the Past, began production in 2004, but due to Children of Bodom's busy schedule the album was never completed. In 2007, Latvala, Porra and Parviainen performed a track for the album Guitar Heroes featuring some of Finland's leading guitarists. Latvala stated that he had originally written the song for the album.