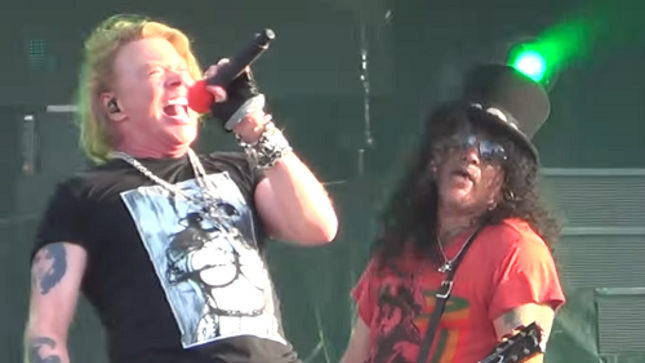 Speaking with Ultimate Classic Rock about whether a new Guns N' Roses album is in the cards when the band's Not In This Lifetime tour finally comes to a close, guitarist Slash said "I think everybody thinks it’s a good idea, and everybody would like to do it. There’s no shortage of ideas from everybody involved, but we’ve been so busy on the road there hasn’t really been time to go in and sit down and go, 'Okay, we're going to make a record.'"

Slash, vocalist Axl Rose, and bassist Duff McKagan are the only original members of Guns N' Roses in the current lineup. The rest of the group is rounded out by guitarist Richard Fortus, drummer Frank Ferrer, as well as keyboardists Dizzy Reed and Melissa Reese.

Guns N' Roses continue their Not In This Lifetime Tour on November 3rd in Monterrey, Mexico at The Tecate Mother Of All Festivals. To view the complete tour schedule, click here.