SLAYER Shift Over $10 Million In Merchandise On Farewell Tour... So Far 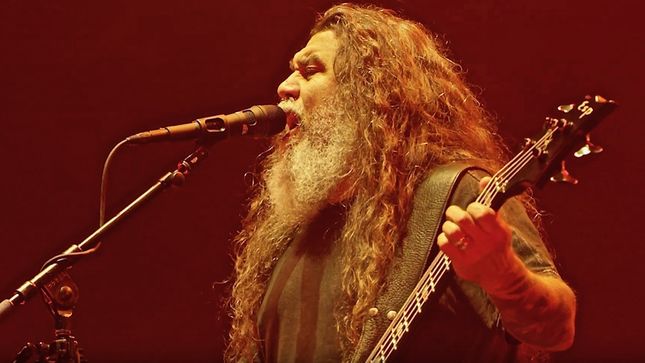 In an extensive feature from Pollstar, Slayer's management reveal that the group's farewell tour is responsible for over $10 million dollars is sales of the band's merchandise.

According to the report, credibility, quality and close involvement from the band has led to a strong brand identity for Slayer as a product, with creative merchandise and product partnerships that may not be obvious at first (such as a Supreme skating and hip-hop streetwear line), and everything from custom liquor to snow globes (or “blood gloves) to BMX bicycles to a whole Scion car.

“There are only a handful of bands on the planet that are that iconic,” says Barry Drinkwater, who co-founded Bravado and now runs Global Merchandising, putting Slayer in a category with The Rolling Stones, Guns N’ Roses and Iron Maiden.

“They’re very focused on the quality of the products, between Tom and Kerry, and very into the design and development,” adds Drinkwater, who works with the band’s management for all merchandise and product partnerships globally, including live and retail. “We have a lot of input from them - how they want the graphics, everything from the color and depth of the saturation. It’s great to have so much involvement from the artists themselves.”

With merchandise and branding partnerships being a big part of an artist’s income, with more than $10 million worth of Slayer merch sold on the farewell tour so far with another leg to go, according to management, the Slayer fashion phenomenon may still have exceeded expectations.

“You’re not supposed to see Slayer shirts on Kardashians, or basketball players rocking Slayer T-shirts as they walk into the arena on TV. That wasn’t supposed to happen,” says Ernie Gonzalez of Rick Sales Entertainment Group, who often travels with the band. “If you said that 30 years ago, nobody could have fathomed that. The awesome thing is they never had to sacrifice any artistic integrity, never tried to tone themselves down to conform or meet the standards of what the music business feels is the best path to success.”

Read the complete feature at Pollstar.

If there is any doubt that Slayer will be sorely missed once the band performs the last show of its Final World Tour on Saturday, November 30, then check out the beginning of the band's concert, Slayer's entrance on stage, and opening song, “Repentless”.

Taken from the upcoming two-part Slayer: The Relentless Killogy motion picture and companion LP/CD release, Live At The Forum In Inglewood, CA, due out November 8 (Nuclear Blast), this is just a demonstrable taste of why Slayer has been one of the most influential thrash/punk/metal bands of the last 35-plus years, why an up-and-coming rock band’s professional “rite of passage” is simply surviving an entire Slayer tour as the opening band, and why Slayer’s live shows are “must-see events”.

Coming November 8, the narrative short film paired with Slayer's entire performance of its August 5, 2017 concert at the Los Angeles Forum will be available digitally and on Blu-ray, and the soundtrack from that concert will be released as both a two-disc vinyl and two CD packages. In addition to the standard black vinyl, eight limited-edition colored vinyl configurations will be available: red, gold and silver vinyl, red/black & orange splatter, red/orange swirl, red/black splatter, yellow/red corona, and black/white corona. Pre-orders can be placed here. Check out the trailer for this special movie release below.

The Repentless Trilogy motion picture opens with the three music videos assembled as one chronological storyline and introduces the narrative's main character, Wyatt, a former Neo Nazi associated with a gang known as "The Hand Brotherhood," whose signature mark was a bloody handprint left after a murder had taken place. Prior to the first music video, Wyatt had left the gang after he fell in love with Gina. The two had gone into hiding to escape his grisly past and start a family, but The Hand Brotherhood was not going to allow that to happen, and Gina, pregnant with their first child, was savagely murdered as Wyatt was forced to look on. The film then segues into the present-time narrative that sees Wyatt on the run from law enforcement and the Nazi gang, but now dedicated to eliminating The Hand Brotherhood and seeking retribution wherever he can.

Part two of "The Repentless Killogy" features Slayer's entire live set performed at the Los Angeles Forum on August 5, 2017, and was directed by Wayne Isham who has directed videos for artists including Metallica, Foo Fighters, Michael Jackson, Kelly Clarkson, and Britney Spears. Presented in front of one of the most striking stage productions of the band's career, Slayer performs fan-favorites including "South of Heaven," "War Ensemble," "Mandatory Suicide," "Dead Skin Mask," "Raining Blood," and "Angel Of Death."