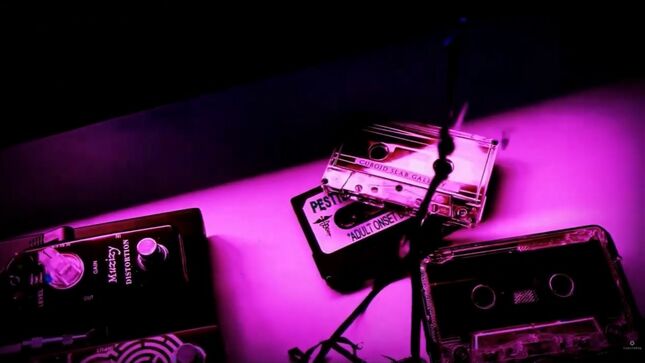 Snares Of Sixes – the exploratory and ever-evolving collective of artists and musicians led by Jason Walton of Agalloch, Sculptured, and more – is preparing to release its second album, MoonBladder, through Nefarious Industries and Transcending Records at the start of October. The record features guests from Kayo Dot, Dreadnought, Winds, and many others.

MoonBladder was mixed by Jason Walton at Earth In Sound Studios, mastered by James Plotkin (Khanate, Sunn O))), Merzbow), and completed with a cover painting by Bridget Bellavia and layout/design by Marius Sjøli. Additionally, a psychedelic video for the entire movement was directed by David Brenner (Gridfailure) infusing footage from multiple band members.

Divulging how the record came to be, Walton writes, “MoonBladder emerged in a very odd way. It started as a twenty-five-minute MIDI idea. Then, Robert Hunter and I did an improv noise set in his house that got added to the MIDI piece. After that, Martti Hill, Nick Wusz, Robert Hunter, and I went into my studio and recorded singing bowls, various pedals, and I even recall pounding on a metal bed frame for a while. Once that was all mixed together, that's when Robert, Marius and I started adding more melodic elements. It continued like this for a few years, until the final pieces of samples, field recordings, and Toby Driver's vocals were added to wrap it up."

MoonBladder will see release October 1 on digital and LP through Nefarious Industries and on CD through Transcending Records. Preorder at Nefariouis Industries.

Watch for additional insight on the making of MoonBladder, the entire thirty-minute video for the record, and more to be posted over the coming days.

Jason Walton is best known as the bassist for Agalloch, in addition to playing with Sculptured, Dolven, Celestiial, Poisoning Wave, Sleepchains, among others. In recent years, the multi-instrumentalist has returned to composing experimental and ambient music under his own name, as well as through Snares Of Sixes where he is joined by a cast of collaborators. A single thirty-minute movement, MoonBladder sees the Snares Of Sixes ensemble painting with a wide brush yet creating highly detailed and intricate music that lends itself to deep listening and patience. Immersive and cinematic, the record dips its pen in the electronics of mid-period Ulver, ambient/noise passages, meditations on field recordings and guitar, cavernous vocal passages, and more.