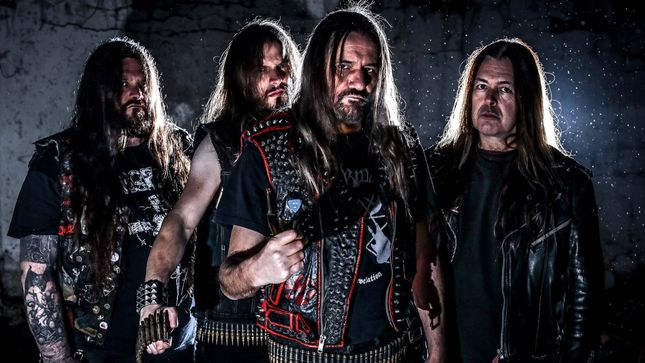 On October 13th, German thrash legends Sodom performed at Red in Moscow, Russia. Check out fan-filmed video of the band's ful show below.

The end of November will see the start of Sodom's extensive MTV Headbangers Ball Tour 2018 alongside Exodus, Death Angel and Suicidal Angels. And as if that wasn’t enough great news, the best bit of intelligence comes directly from the thrash metal act’s inner circle...

“We’re a real family again,” enthuses frontman Angelripper following the band’s lineup change in spring 2018. “We all really enjoy the new lineup consisting of Frank Blackfire (guitar, ex-Sodom, ex-Kreator, Assassin), Yorck Segatz (guitar, Beyondition), Husky (drums, Asphyx, Desaster) and myself. There’s a real team spirit again, we’re having a great time together, every one of us is interested in everything and - really important! - everybody is there for everybody else. Obviously that kind of atmosphere is bound to have a positive effect on the songwriting.”

Examples? Sodom’s new Partisan EP will be out in November, featuring three tracks including a live recording from this year’s Rock Hard Festival. The new lineup could hardly present itself in a more impressive manner!

Partisan will be released through SPV/Steamhammer on November 23rd as CD digipak, 10" clear vinyl, download and stream.