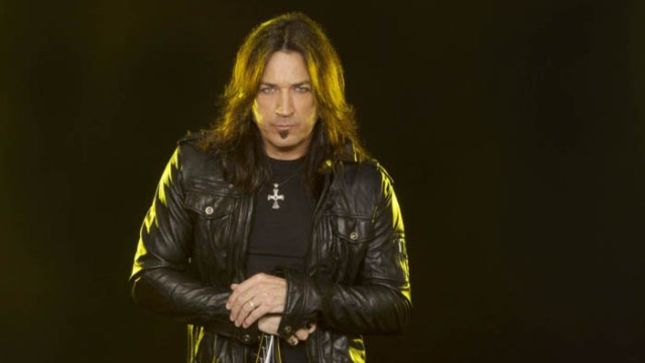 Stryper frontman Michael Sweet recently spoke with Rock Confidential about the band's new album, God Damn Evil, and the effects of social media on the relationship between bands and the fans, and plans for new recordings. An excerpt is available beloww.

RC: Are you still humming riff ideas and melodies into your phone and recording them for writing purposes?

Sweet: "I still do. Usually what happens, about three or four months out from recording an album I’ll start doing that. I’ll hum ideas into my phone and then go back and listen to it and pull from that and create chords around that idea and create a song. I haven’t done that since we turned in God Damn Evil, but I’ll probably start doing it once we get out on the road in May or June. I’ll start getting my ideas going. Then the next album will be a solo album or one with Joel Hoekstra. I’ll start writing a couple of weeks before we start recording. I like working under pressure. It helps me to focus more and it helps me deliver more."

RC: So the album with Joel will be a group project?

RC: Is it in the plans to re-record more songs from the Stryper catalog?

Sweet: "It is. We’ve always wanted to do that with five or six songs from In God We Trust, five or six from Against The Law. People might wonder why we’d do that. I really believe, and we’ll have to prove it, that we can outdo the production on those two albums to make it more modern, more in-your-face, and today. Same thing we did with Second Coming. We’ll add a couple of more songs from Yellow And Black Attack. We only did two from that album on Second Coming, so maybe we’ll do “From Wrong To Right” and “Co’mon Rock” or something and then add a couple of new songs."