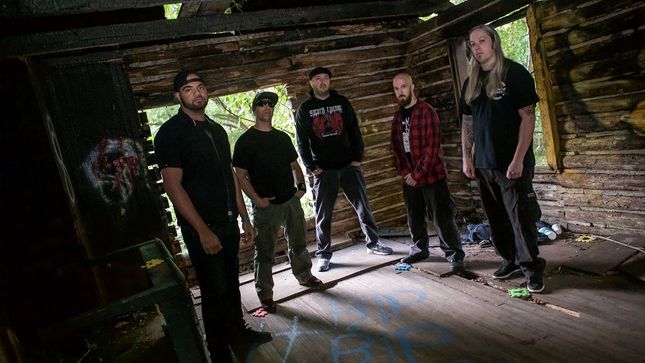 The Queens, New York-based Sworn Enemy – whose intense fusion of metal, thrash and New York hardcore has provided the soundtrack for numerous moshpits over the past two decades – have signed with M-Theory Audio. The label will release the group's sixth album, produced by Robb Flynn of Machine Head, in 2019.

Vocalist and founding member Sal Lococo says the new album – nearly five years in the making – will be worth the wait. “First and foremost, we want to thank Marco Barbieri at M-Theory Records for believing in Sworn Enemy,” he says. “We also want to take a minute to thank Robb Flynn and Zack Ohren at Sharkbite Studios for putting up with us at the studio. The new album is savage as fuck and would not have been possible without you guys. Now it’s time to get back out on the road and show everyone how fucking great this new shit is!”

This weekend, Sworn Enemy will kick off the second leg of its European tour commemorating the 15th anniversary of the release of the group's Jamey Jasta-produced debut album, As Real As It Gets.

Says Lococo, “We are also coming to Europe again since the first time wasn’t enough! If you missed us the first time around, here’s your chance to see us again. We hope you're ready.”

Sworn Enemy was first signed by Hatebreed frontman Jamey Jasta, who released the group's first two EPs on his Stillborn Recordings label in 2001 and 2002. He also produced the band's full-length debut, As Real As It Gets, which was released by Elektra Records in 2003, a year that saw the band deliver memorable performances on tour with Ozzfest.

In the 15 years since, Sworn Enemy released four additional albums of punishing metallic hardcore and toured with a number of notable acts, including Anthrax, Mastodon, Fear Factory, Sepultura, Suicide Silence, Dying Fetus, Earth Crisis, Madball, Biohazard and Hatebreed. The band expects to spend much of 2019 touring support of its new album; stay tuned for additional details in the coming weeks.