TONY IOMMI Working On New Music – “When All This Nice, Sunny Weather Goes And It Gets Grim, I Shall Start Going In The Studio And Putting It Down." 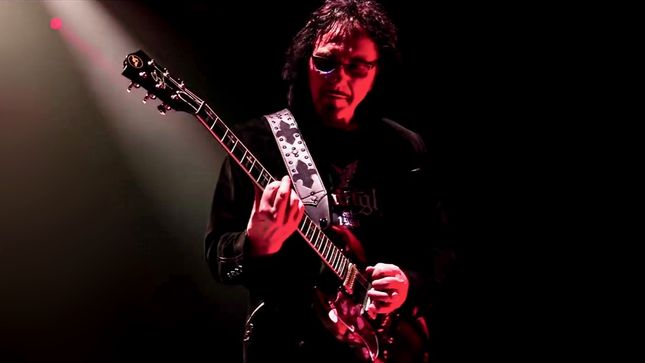 Black Sabbath guitarist Tony Iommi has revealed that he’s working on new music during a Q&A session prior to the screening of Black Sabbath’s documentary The End Of The End on August 19th at the U.K’s Whitley Bay Film Festival.

Iommi said, "I'm still writing stuff; I've put ideas down on tapes. When all this nice, sunny weather goes and it gets grim, I shall start going in the studio and putting it down. "My engineer, who I had for everything with me at home, he's just done Judas Priest's album. Now he's finished that, and we'll hopefully start again and put some ideas down. I don't know what it's gonna be yet — whether it'll be an instrumental album. I've been approached by a lot of people to do something with them."

In a new interview with The List, Iommi discusses life with Black Sabbath and his upcoming trip to Scotland. An excerpt follows:

The List: Could you tell about the accident you had as a teenager?

Tony Iommi: "My fingers were damaged when I used to work in a factory welding. The metal parts would be sent to me and I'd weld them. One day the bloke who used to usually send them to me, and bent all this steel, didn't come in so they put me on his machine. I'd never worked the machine before, I wasn't shown properly, basically it came down on my hands and as I pulled my hands back I pulled the end of my fingers off. It was like a big guillotine."

The List: However, this led to your unique guitar style in Black Sabbath.

Tony Iommi: "It changed my whole life in terms of playing. Firstly, I was told I'd never be able to play again by various doctors, so I had to develop something that would allow me to play. So I made my own finger tips [out of plastic] because they were very sore and painful, I had to learn to play again, a different style of playing, and try and find a way that made it comfortable and didn't hurt. I had to look at the guitar completely differently and set it up with different strings, the whole thing had to change."

The List: When you started out did you think this darker heavier music would find an audience? As no one else was playing anything like Black Sabbath at the time.

Tony Iommi: "I think the thing with music is you've got to do what is in you, and believe in what you do. If you start aiming towards a fanbase, you are doing something other people want, so first and foremost you have to do what you want and hope other people like it. It took a long time because there wasn't the internet or anything like that so it was all word of mouth, getting out, working and doing it."

The List: When did you first see the word 'metal' associated with Black Sabbath?

Tony Iommi: "That was a lot later around 1973 or 74. It was an interview I was doing, I think it was with Melody Maker, they said 'you play metal,' and I was like 'what's that?' because I'd always classed ourselves as heavy rock."

The List: How does it feel to be credited with inventing a whole genre?

Tony Iommi: "Fantastic. It's unbelievable really. It's really pleasing to see when you look back from being told you're never going to play again to inventing a new sound and a new sort of music."

In regards to the upcoming “A Life In Music” events: Legendary Black Sabbath guitarist Tony Iommi will give us a fascinating insight into the life and career of a man whose influence on the history of popular music cannot be overstated. A key innovator and a true rock star in every sense.

When we think of guitarist Tony Iommi, we think of heavy rock and of his innovative dark riffs. We think of the beginning of heavy metal.

Over 100 million albums have been sold by Black Sabbath. Their most recent album scored number 1 in many countries, including the US and the UK. But not only the recorded sector has been ruled by the legends, but also the live music market. Over 1.6 million people came to see the band perform during their last world tour.

Besides releasing three solo albums, Tony has been inducted into the Rock And Roll Hall Of Fame, wrote a New York Times bestselling autobiography, has received two Grammy Awards and Birmingham’s Broad Street added his star.

Evening host Phil Alexander comes from a print, radio, TV and online background, where he had different roles, as editor, broadcaster, presenter and producer. As editor of Kerrang! he transformed the magazine into a multi-platform brand by launching the Kerrang! branded TV, radio, website and awards and besides being editor-in-chief for MOJO, he later was appointed Global Creative Director of Kerrang! Magazine And Rock Music Media.

This is a night not be missed.

Get tickets for the Paisley date here, and for the Edinburgh date here.