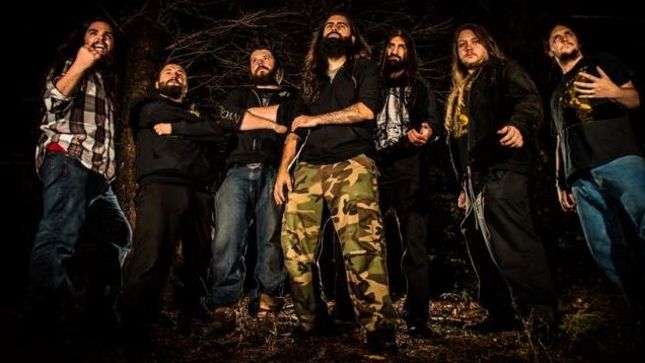 Quebec’s Trollwar prepare to march on the warpath once again with their new album Oath Of The Storm, introduced with their first single "Summoning". The track takes the listener through a harrowing tale calling forth a devastating force from the depths.

Oath Of The Storm maintains the folk metal roots that the band has garnered acclaim for, but the party has been ever evolving and ensures a more symphonic experience than from albums past.

“The new release will be way darker and deeper than Earthdawn Groves, but Trollwar is always following the same path. Starting from a blend of blackened folk metal, we worked really hard to develop the melodic and dynamic aspects that forge our sound. Prepare for something really epic. Adding an orchestral aspect to both the album production and live act will be a great phase for us.”

Produced by Christian Donaldson (Cryptopsy, The Agonist, Beyond Creation) from The Grid, the production has been raised to a new level and "Oath of The Storm" contains four remastered songs with refined orchestration from their 2017 EP The Traveler’s Path as well as eight brand new adventurous and epic tracks perfect for the soundtrack of your upcoming raids.

Taking notes from bands such as Wintersun, Ensiferum and Finntroll, Trollwar is sure to be appreciated by fans in a multitude of realms including melodic death, folk, black and power metal.

Oath Of The Storm will be available to add to your inventory on November 16th.