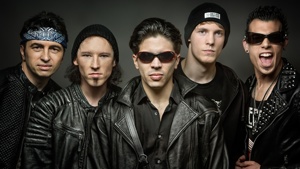 From Hessen with headbanging love! Ah, so Germany has yet again produced another sheer powerful outfit in Unbreakable, the talented teutonic rockers whose debut album was produced by legendary Herman Rarebell, the celebrated former drummer of the Scorpions and someone who is fully behind this band and rightfully so. "They could be the next Scorpions! That is what I think and feel. America...get ready for Unbreakable!", exclaims the iconic Rarebell when discussing the hard-rocking boys from Germany. Vocalist Al Crespo was recently the featured guest on Matt O'Shaughnessy's WVOX Metal Mayhem show in New York where he spoke with excitement of working with Rarebell as producer of Unbreakable's new album, Knockout and much more.