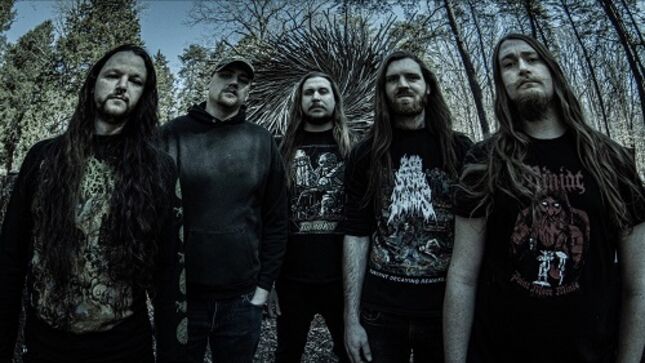 Prosthetic Records has announced the signing of Louisville, Kentucky based progressive black metal group Volcandra. Alongside the signing announcement, Volcandra have announced a new EP titled Border World - their first release on the Los Angeles label - with the lead single "Tallon IV", which can be heard below .

Border World will be released on June 24 and is available to pre-order here.

Speaking on their signing and EP announcement, Volcandra comments: "We are thrilled to announce that we have signed to Prosthetic Records for the unveiling of our new EP, Border World, and future releases on the horizon. This EP was written and recorded during the thick of the COVID-19 lockdown. It picks up where we left off with our previous full-length, Into The Azure, while simultaneously exploring uncharted musical territory for the band. With a more collaborative and focused dynamic, we are very excited to see years of work come to fruition."

On "Tallon IV", the band adds: "'Tallon IV' is the opening track to the EP showcasing a balance between melodic passages and bursts of relentless ferocity accompanied by lyrics that will send the listener on a death-defying, futuristic science fiction adventure."

Since their 2019 inception and a well-received 2020 debut full-length, Into The Azure, Volcandra have steadfastly been honing their craft on both the live-circuit and in the recording studio. Across Border World’s runtime, Volcandra offers a distinctively futuristic vision of melodic black metal - with lyrical tales of possessed mythical beasts, draconic cyborgs and mystical border worlds inspired by a deep love for video games and futuristic storytelling. All of these thematic elements are brought to life in stunning fashion by Varises Otak (Cattle Decapitation, Cryptopsy and Amon Amarth)’s cover art.

Disinterested in theatrics and forced mystique, Volcandra’s latest slice of fantasy world building is a byproduct of the band members lifelong reverence for science fiction - which serves as a vibrant alternative to some of metal’s darker corners. The group have officially opened the portal to their border world, and the invite remains open for all dreamers and wide eyed escapists who wish to enter.