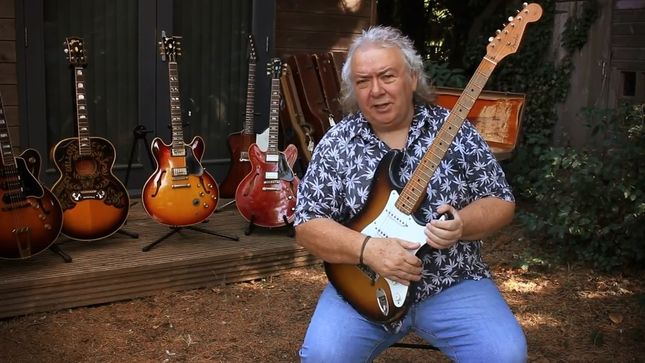 Rufus Publications will release the new book, Bernie Marsden - Tales Of Tone And Volume, in November.

In the video below, Marsden talks about one of the guitars from his forthcoming book. The Fender Stratocaster NSA (yep, that’s right) is an unusual guitar and you can see it in all its close up glory in the book.

Bernie Marsden is one of the UK’s foremost rock and blues guitarists, famous for his time in professional bands since 1972 and a founder member of one of the biggest rock bands of all time, the mighty Whitesnake. But, there is a lot more to this man, from his first band UFO to treading the boards of the National Theatre in London, on stage with Ringo Starr in Monaco, playing the Beacon Theatre in New York with The Allman Brothers Band, writing and playing with Joe Bonamassa and Motörhead.

His long term friendships with so many top names in the guitar business, Billy Gibbons, Steve Lukather, Warren Haynes, rejoining the new Whitesnake lineup of recent years and a solo career that keeps him both on the road and in the studio. He became interested in guitars as a teenager watching The Beatles, his fascination continues to this day.

Bernie has developed one of the most unique and expansive private guitar collections in the world.

Over the last two years the collection has been extensively photographed by Melvyn May and the Rufus team using a special “light painting” technique to reveal them in all their glory, from the unseen wonders of the world famous “The Beast” to the intricate detail on his much signed and cherished Martin Coletti. Every guitar comes with its own story, from how it was acquired to where and when it was played, you will be able to see the very guitar he used during the writing and recording of some rock classics, many anecdotes of some pretty famous people encountering his guitars on the road and in the studio.

The images have been assembled into this beautiful, 340-page plus full colour luxury book, available in three stunning editions. Accompanying the book will be a CD of original guitar backing tracks written just for this project. The CD will contain a backing track for the user, plus lead guitar from a vintage guitar seen in the book. The two high end editions also ship with a genuine piece of an original 50’s Lifton guitar case, taken from Bernie’s collection and carefully cut down to include with each copy.

As Bernie says, “I love guitars and I’ve seen and collected many books on the subject, the time and effort spent creating these images and the finished book makes this an extraordinary book by any standard. I’m really proud of what has been created here. I’m bound to say it, but, if you are a guitar collector, a player, or simply an official guitar nerd you are going to love this book. and the photographs of “The Beast” took my breath away.”

“The Beast Edition” is a large, and we do mean large A3 Portrait book, quarter bound in brown re-cycled leather, that comes in a wooden clamshell case, engraved with The Beast Logo. It also ships with exclusive framable prints of The Beast, a CD of music, a 7” vinyl single and a folder containing a piece of vintage 1950’s Lifton guitar case. Limited to 100 Signed and numbered copies worldwide.

The Deluxe Edition is also an A3 Portrait book, bound in black leather, that comes in a special embossed clamshell case. It also ships with exclusive framable prints of guitars from the book, a CD of music, and a folder containing a real piece of 1950’s Lifton guitar case. Limited to 350 Signed and numbered copies worldwide. The standard Edition is an A4 Coffee Table book that comes in it’s own card slipcase and is a brilliant way to enjoy this beautiful book. This book is not limited.

Sign up for exclusive pre-order information here. Watch a trailer video below: