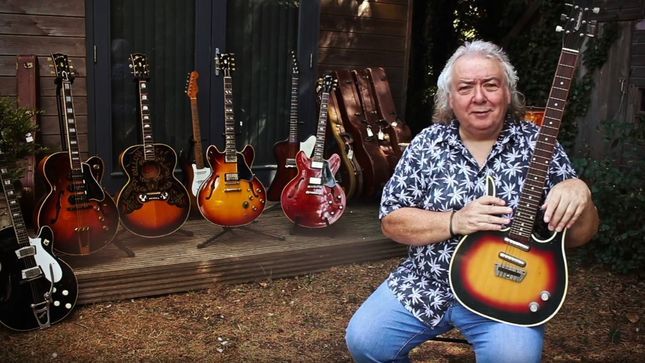 The UK-based Mirror recently published a report on legendary Whitesnake guitarist Bernie Marsden beiing recruited by singer Cliff Richard. Following is an excerpt from the story.

Cliff Richard once tried to take a break from his Summer Holiday image – with the help of a guitarist from hard-rock legends Whitesnake. Squeaky clean Sir Cliff was introduced to rocker Bernie Marsden by his own manager in a bid to harden up his sound.

Marsden “His team had thought it would be good to introduce a hard-rock feel. There was a certain amount of surprise from those around Cliff, a lot of eyes were watching me. I could feel an uneasy vibe – why the hell is this ex-White­snake guitarist at a Cliff Richard gig? I watched the show and made mental notes of just how many changes there needed to be. I could see that a lot would need to be done."

"It was a great thrill to play guitar on The Young Ones, standing next to Cliff Richard. It was plain to see Cliff liked it. When his management team came to see, their faces got increasingly dour – they could see his audience disappearing."

In 1980, Bernie Marsden - along with with fellow Whitesnake band members Jon Lord, Ian Paice, Neil Murray, Micky Moody and David Coverdale - recorded Whitesnake's Come An’ Get It album in John Lennon and Yoko Ono’s one-time home in Ascot, Berkshire, which was then owned by Ringo Starr.

In a new feature from British GQ, Marsden recalls the experience. Read an excerpt below:

"With only four days off after the Ready An’ Willing tour, we started the new album in July 1980 at Ringo Starr’s fabulous house in Ascot, Berkshire.

"His studio, Startling, was a private facility in the former home of John Lennon and Yoko Ono, Tittenhurst Park. We were very fortunate to be given this chance to work where John Lennon had recorded the unparalleled album Imagine.

"When I first saw the glass panel above the door with the inscription by Yoko Ono, 'This is not here', I got a tingle down my spine. In the kitchen I saw the very table where George Harrison, Eric Clapton, Phil Spector, Bob Dylan, Keith Moon and Elton John had sat many times. The John Lennon film Gimme Some Truth shows you the object itself. I’ve had my breakfast in that kitchen, at that table, sometimes sharing the space with the very young Zak Starkey [Ringo’s son] before he went to school. All of us had a similar reaction in those first few days at Tittenhurst: even Jon and Ian were a little in awe of the place. The rest of us certainly were."