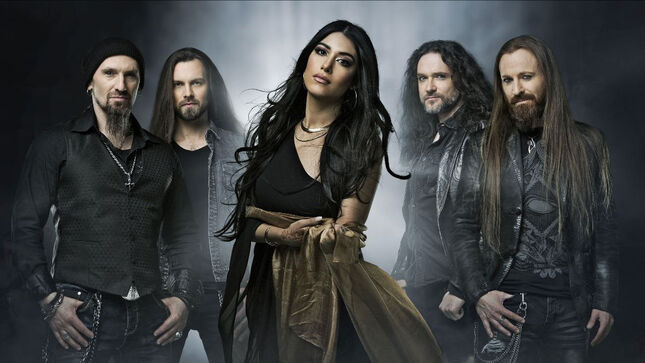 After breaking the silence with their recently released standalone single "Reborn", alongside introducing a new lineup, German symphonic metal icons Xandria continue this next chapter, promising adventure with a brand new song, “You Will Never Be Our God”. The exciting, fresh offering features none other than Primal Fear frontman Ralf Scheepers, whose heavy voice scintillates along with the dynamic range of new Xandria vocalist Ambre Vourvahis.

“You Will Never Be Our God” showcases its wide musical spectrum, opening with heavy riffs and haunting growls reminiscent of bands like Arch Enemy, but merge into a flawless symphonic style, carrying the renowned trademarks Xandria are loved for. Followed by modern and classic 80s-styled riffs, the band proves their musical versatility, showing that they do not comply with any rules, while incorporating death metal and operatic voices - reaching effortlessly across genres.

This massive new track comes right as Xandria readies to embark on a top-notch co-headline tour throughout Europe with labelmates Visions Of Atlantis, plus Ye Banished Privateers rounding out this exciting package. The tour is set to begin tomorrow, September 8 in Hamburg, Germany, and will visit several major cities into October, coming to an end on October 15 in Wetzikon, Switzerland.  On this impressive run, Xandria will grace their fans with an energizing performance placed in an all-new visual surrounding, heating up the anticipation for everything that is about to come even more. Don't miss your chance to dive into breathtaking soundscapes of symphonic metal at its best.

Xandria on “You Will Never Be Our God”: "'You Will Never Be Our God' shows how diverse our next album will be. This song alone features elements from different metal genres, classic and modern, and melts them into something new that shows how well and fresh it can come together. But, at the same time, it reflects everything that Xandria stands for, including bombastic film score orchestrations and big choirs!”

Watch the official video for “You Will Never Be Our God”:

Watch the video for the previously released "Reborn" below: